Last week JCDecaux announced the official inauguration of the Play table (one of JCDecaux’s six Award-Winning Intelligent Street Furniture items selected by the City of Paris) in the presence of Jean-Louis Missika, Deputy Mayor in charge of Innovation, Research and Universities, and Pierre Aidenbaum, Mayor of the 3rd arrondissement in Paris. 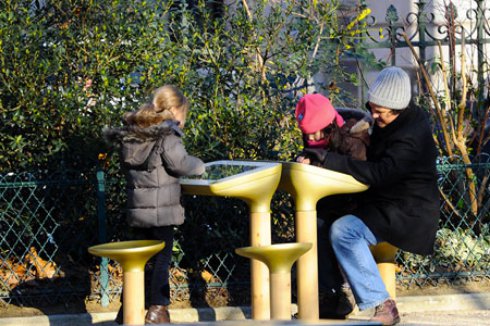 In response to a call for projects launched by the Paris City authorities, JCDecaux designed 6 innovative concepts representing the company’s vision for digital services in the urban environment. The aim is to make Paris easier to navigate and more accessible for the public. JCDecaux designed its offering around 5 major themes: discovering, getting information, sharing, working, and playing. Paris residents and visitors have already been able to experience the Concept-Bus Shelter, the ‘Décodeur Urbain’, the Digital Totem, the Digital Harbour, the e- Village; they can now enjoy Play.

Albert Asséraf, Executive Vice-President, Strategy, Research & Marketing of JCDecaux, told us “We are delighted to be unveiling the Play table, part of JCDecaux’s Intelligent Street Furniture range that is currently being tested in Paris”.

He added “The City of Paris has given us a wonderful opportunity to test this new service with residents and tourists. We are proud to have developed the initial games in partnership with PlayTouch, a start-up company that has been based at our offices in Neuilly-sur-Seine since 2011. This latest Intelligent Street Furniture product underlines once again our Group’s expertise in terms of innovation to provide public services and our wish to be open to new content creators”

Designed by fashionable industrial designer Mathieu Lehanneur, the Play table is a playground for the digital age, created specifically for Paris’ parks and gardens.

Installed in the Square du Temple (in the 3rd arrondissement) in January 2013, the digital playground comprises two 22-inch multitouch screens that are tilted for optimum visibility. Each screen (play table) provides access to games and can be rotated around an off-centre axis to allow users to adjust the screen into a comfortable position when sitting on one of the three seats provided or, alternatively, in a wheelchair.

This digital table is based upon an open-source platform, using standards for online and smartphone applications, making it easier to include games created by a wide range of developers. The first games to be included on the table were developed by PlayTouch, a company that has developed and published games since 2010.

This entry was posted on Monday, February 4th, 2013 at 09:32 @439 and is filed under DailyDOOH Update. You can follow any responses to this entry through the RSS 2.0 feed. You can leave a response, or trackback from your own site.