How Far Does a MegaPixel Go?

How Far Does a MegaPixel Go? The answer is not very far at all. One of the points I tried to make in my recent post about the MegaPixel Summit at #ISE2013 was that a million pixels is puny.

That raised a few eyebrows. But let’s take a look at some numbers and you’ll understand what I mean.  Displays of many megapixels are easily created today and even a gigapixel (one thousand megapixels) is on the edge of do’able now.  Soon, a gigapixel will become mainstream.

Pixel Density is What Matters

For large area tiled-displays (it doesn’t matter what technology), it makes sense to normalize things on a per-square-metre basis. For example, if you know the cost per square metre, it’s pretty easy to extrapolate to the cost for 10 square metres. Let’s look at pixels-per-square metre (I’ll call that the ‘pixel density’) in a similar way.

The chart below illustrates the pixel density for a range of technologies commonly in use indoors. I had to use a logarithmic scale because the range covers two orders of magnitude! I included displays from 2k digital cinema (a very pleasant viewing experience) all the way to Apple ‘retina’ displays (an exceptional viewing experience). 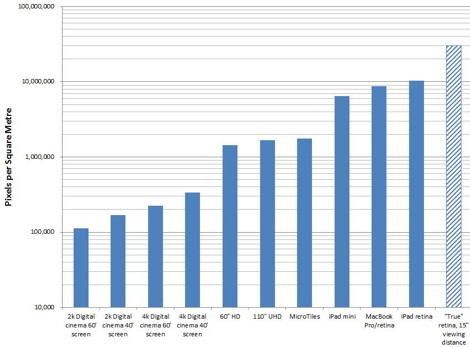 First, you’re probably going to say that this is absolutely not an apple-to-apples comparison and you’d be right. For example, it’s perfectly OK for digital cinema to have lower pixel densities because most people sit 20+ feet back from the screen.  But for indoor DOOH, people will often be arms-length or closer to the display, especially if they’re going to interact with it. That’s where high pixel density will really matter.

Next, you’re probably going to say that Apple ‘retina’ displays shouldn’t be on the chart because you simply can’t buy square-metre sized retina displays.  Again you’d be right. But that’s only true today. Display sizes will keep rising. Pixel resolutions will keep rising. And the cost per pixel on those displays will keep declining. My point is that retina-quality large area displays at reasonable costs are inevitable.

Finally, some of you will argue “who cares” – that it will always be cheaper to use ‘minimally acceptable’ pixel densities. I argue that the ‘best affordable’ will continue to win over the ‘cheapest acceptable’ displays.

For large area up-close interactive displays pixel density will become more and more important. In  a recent article on the Cult Of Mac blog John Brownlee argues that the resolution of displays needs to, double or more, for a true life-like display (see the crosshatched bar on the right of the chart above). Brownlee says, “The truth is our devices suck us in as close as we can be to them. And if our displays are ever going to reach their ultimate form — living paper — they need to have enough resolution that we can zoom in to see more detail just like we would with a piece of paper”.

If I was a brand that wanted to display my high end product on an interactive DOOH display, that’s what I’d want.  As soon as it became affordable. Not cheap; affordable.

How big would a gigapixel display be?

Assume for a moment you agree with my reasoning so far. How big an area would a gigapixel (1000 megapixels) cover with displays available today and with the ones I predict we’ll be using in the near future? The answer is pretty big, but not as big as you guess. This chart tells the story: 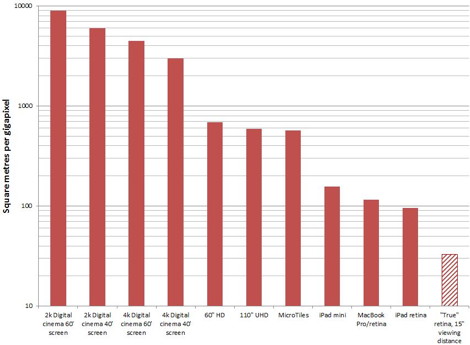 A gigapixel MicroTiles display (disclaimer, I helped develop MicroTiles when I worked at Christie) would use about 4600 tiles and cover about 567 sq. metres. A gigapixel 110” UHD display would take about 178 displays and cover a slightly larger area. Those size installations are very big but are technically feasible. That’s one of the reasons architects will need to be involved in preparing for a gigapixel future.

But when we get to Apple retina class displays in 110” screen sizes, we’ll only need less than 30 displays tiled together. Think about that: only 30 tiled displays to get one thousand megapixels. That’s why I believe it’s now reasonable to think that gigapixel tiled displays will be in mainstream use the not too distant future.

The display technology may not be what holds the industry back

It’s the infrastructure that will be the real challenge.

If it’s hard to seamlessly control the big multi-tiled  displays we have today (and it is), imagine how hard it will be with so many more pixels to control. Let’s hope nVidia, AMD, Matrox and others are thinking about this.

If it’s hard to get really good content developed today for tiled displays, who’s going to be ready to create gigapixel content? What kind of tools will be needed? How long will it take to render/revise/re-render content to make it as good as it needs to be on the superb displays on the horizon? What kind of computing power will be needed?

Delivering content to players is going to be a big challenge. I shudder to think about even 30 frames per second on a gigapixel display when superb displays are going to need higher frame rates. Who’s thinking about that?

I think these problems are really great opportunities for innovators. That’s why we need a Gigapixel summit to look beyond, way beyond, today’s megapixel world!

This entry was posted on Wednesday, February 13th, 2013 at 16:07 @713 and is filed under Guest Contributions. You can follow any responses to this entry through the RSS 2.0 feed. You can leave a response, or trackback from your own site.

One Response to “How Far Does a MegaPixel Go?”