It’s called ‘Big Company Intoxication‘ and our industry has been full of it for years and it has perhaps, sort of come to a head, with last week’s, frankly ridiculous, press conference from Samsung and the launch of their so-called ‘Samsung Smart Signage Platform‘. 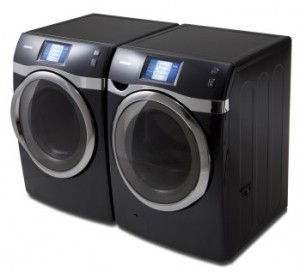 The motives are always going to be suspect of any large corporate entering the digital signage / digital out of home space.

As I made mention in my presentation ‘Five Undeniable Truths About Our Business‘ at last year’s Investor Conference in New York the precedent has been set – just take a look at Cisco / Intel / Harris / A.N. Other Screen Manufacturer…

The one thing that all these big companies have in common is that they do not understand the real dynamics of the industry (and perhaps never will). They are keen to jump into the industry and attempt to make a big splash but as we have continually said – there is absolutely no thought leadership from any of them and no attempt at cross industry standards setting.

So, back to last week at #ISE2013, where Samsung had a press conference to reveal the industry’s worst kept secret – that they were to launch their own Smart Washing Machines – no, whoops, sorry I am confusing that with #CES, I mean ‘Smart Signage Platform’.

Lest people be in any doubt of the power of the Samsung brand (and perhaps the dizzying array of food and drink on offer at a lunchtime press shindig) the press conference was absolutely packed with journalists and news crews.

Vincent Slevin, European Business Manager at Samsung Electronics, took to the stage and presented like a nervous school boy – either because he was nervous or much more likely, cos’ it soon showed, that the poor man knew nothing about the industry and was about to embarrass himself on stage.

He introduced Samsung as the industry’s saviour, they are already, we quote “world leaders in digital signage” and he added “this new introduction will revolutionise the industry”.

Revolutionise? Seriously? Who writes this stuff? Oh yes, that’s right people who do not understand the industry, have their own agenda and are arrogant enough to think that people will believe all that they are told.

There was much talk about building an eco-system, open this and open that, and of course ‘partnerships’ but of course bottom line, none of this is OPEN† and Samsung’s one simple goal is not to help the industry, not to grow the industry but to sell more screens.

Samsung claim to already have 55 software vendors in their partnership programme but only two were presented on stage and as usual, the real story is all those that we know about who declined to sign up (it would be interesting to know who in our own #DSTop10 was approached and who declined).

Tom Nix from Scala and Jason Cremins from Signagelive were those brave enough to take part in the press conference and after the introductions / initial spiel, both gave credible presentations on why they were there and what it meant to them (to be fair the Samsung strategy better suits Signagelive’s business model and Jason did a good job of elaborating on how he saw it working).

Bottom line though, I cannot help feeling that both Scala and Signagelive have shot themselves in the foot by going so public with the partnership. We all know that in our industry big projects can come from anywhere, and you just know that the next time LG / Panasonic / Sharp / NEC Display Solutions / delete as applicable have an order for 1,000’s screens and are looking for a software solution for a client that they probably won’t come knocking on the door of Scala or Signagelive.

† If you are a screen manufacturer and you truly want open then take a look at the Open Pluggable Specification (OPS) and if you really want to push the boat out spend some time making sure that the free, multi-platform, open source media player that can be driven by any content management and scheduling system, i.e. OpenSplash works well with your hardware (same applies to all of the OPS compliant PC Manufacturers out there, of which there were dozens at #ISE2013 we were pleased to see).

This entry was posted on Tuesday, February 5th, 2013 at 18:44 @822 and is filed under Scuttlebut. You can follow any responses to this entry through the RSS 2.0 feed. You can leave a response, or trackback from your own site.