Umm, is this the only way that AOpen feel that they can remain relevant in the sector and protect their revenues and interests? We think so because, based on the reception that OpenService received in North America, this is the last thing we would have expected from AOpen in Europe – a geographical part of the AOpen organisation that usually listens to market sentiment and normally gets it right when it comes down to business. 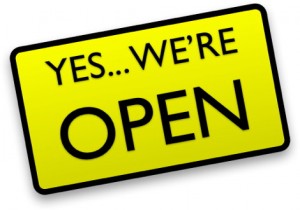 Not so this time however, it seems, as their big announcement at #ISE2013 last week was the launch of an OpenService Division in Europe spearheaded we believe by AOpen’s Marc Janssen.

The press release didn’t start off too well, and AOpen should know better, it tries to put OpenService in context, we quote “After successful execution of the OpenService concept in the US, AOpen proudly presents the opening of its new division in its European head office in the Netherlands”.

It continues “AOpen recognizes the need for a more consultative approach towards digital signage implementations … for this reason the division OpenService was founded in the US in 2011 and thanks to its success has now opened its office in the Netherlands, to serve as a hub for OpenService for Europe”.

Bottom line of course, AOpen are offering end-to-end consultancy and service offerings as part of this ‘package’ and whilst it has been explained to us 1:1 in some detail, to us it appears that they are simply working against the very software vendors who sell the AOpen hardware product.

Personally we feel that this is a bad move for AOpen. AOpen would be better served continuing to innovate in the hardware space and properly being ‘open’ – perhaps by designing and releasing some Open Pluggable Specification (OPS) devices and getting behind the free, multi-platform, open source media player that can be driven by any content management and scheduling system that is OpenSplash.

That innovation, some thought leadership and a lot of ingredient branding would do AOpen a lot more good than attempts at consulting that will surely, only do them harm in the long run.

This entry was posted on Wednesday, February 6th, 2013 at 15:06 @671 and is filed under DailyDOOH Update. You can follow any responses to this entry through the RSS 2.0 feed. You can leave a response, or trackback from your own site.