If you missed Jimmy Kimmel last night, don’t worry about it: you might see what you missed on Outcast Media [1]’s pump top network when you gas up your car. 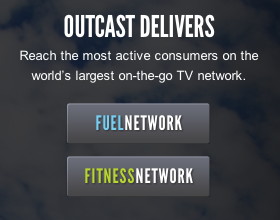 Outcast’s audience – also known as the ‘Ungettables’ – consists of drivers 18-to- 54 who travel more than 8,000 miles each year by car and live in the top 25 DMAs. Ungettables love to catch the news, sports, entertainment and commercials at the pump, while filling up at the gas pump. (The average fuel time at an Outcast pump is four minutes.)

“We are very excited to offer our viewers the high quality comedic content they crave like Jimmy Kimmel Live, and in turn to help a broadcast giant like ABC reach and engage with our hard-to-reach audience,” says Nathan Gill, Outcast co-founder. “88% of our viewers fuel up before primetime, which offers ABC with a perfect opportunity to reach people who are on a pathway to primetime television viewing.”