With Brazil having been awarded both the 2014 FIFA World Cup and the 2016 Summer Olympic Games, we know that there’s already huge interest by advertisers to be omni-present to reach the huge crowds expected to attend as well as the millions of television, Internet and mobile viewers worldwide. 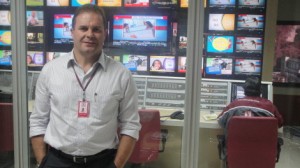 If anyone knows where the digital out-of-home industry fits in that market and what it has to offer, it’s Arnold Eugenio Correia.

Arnold is president of the Associação Brasileira de Mídia Digital Out of Home (ABDOH – The Brazilian Digital Out-of-Home Association) and president and CEO of SubWay Link.

Digital Signage Expo and DailyDOOH have joined together to produce this one session at #dse2013 that gives a perspective on what is happening in Digital Out-of-Home in other parts of the world and we expect that Sao Paulo-based Correia will be a major draw both because of the interest in the World Cup soccer and Olympic games, and because of the growing importance of the Brazilian and, indeed, the entire South American and Latin American markets.

“I’ll talk about how DOOH Media/Advertising and the Digital Signage industry are growing in Brazil,” Correia says. “I’ll discuss a lot of cases – strong cases – that we have in our country with big media companies entering in the Digital Out-of-Home sector and with the great opportunity that the two big events – World Soccer Cup and Olympic Games – will bring for us.

“And when we look around the Latin American countries, we can see that this is the ‘doors open’ to our better companies to expand internationally. We have many opportunities to use the Brazilian DOOH growth experience in building relationships with brands and local operators to create a state-of-the-art DOOH LATAM player.”

We’re sure that conference attendees will have questions for Correia, for example – perhaps you’ve heard that digital signage is totally banned in Sao Paulo? Don’t believe it. Correia will be able to set you straight, as he did me when we met at last year’s DSE.

If the South American market and its activities are at all of interest to you, this is a don’t miss session! Attendees can register here for the half-day (morning) session on Feb. 26.

This entry was posted on Sunday, February 17th, 2013 at 15:46 @699 and is filed under DailyDOOH Update. You can follow any responses to this entry through the RSS 2.0 feed. You can leave a response, or trackback from your own site.