Since the launch of POSTV’s Supermarket TV launched back in March 2008, dozens of top brands have advertised on the 1,200 or so screens that make up the network. The GREAT news though, applicable most probably across the retail sectors is that research from Nielsen indicates that the average sales increase for advertisers is 14% !!!! 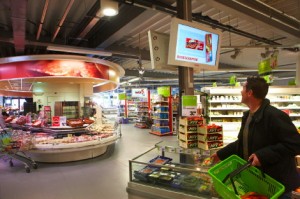 She added “It’s great that the figures from widely respected research firm Nielsen now bear this out. This isn’t only an enormous confirmation for us and the supermarket entrepreneurs. The twenty-five top brands that stuck out their necks to advertise on this relatively new medium have been rewarded for their trust in Supermarket TV and in POSTV”

POSTV, a member of the Neo Media Group [2], offers retailers access to the largest digital signage network in Europe and North America. With a focus on the sectors of fast-moving consumer goods and consumer electronics, POSTV installs, administers, maintains, and operates a growing number of in-store TV networks at renowned retailers

This is really encouraging news for the industry. Hard facts and hard evidence from an independent third party, hopefully the industry can use to determine the golden “ROI” for potential customers and advertisers. My experience my previous network (BMG) was achieving an average basket increase from retail operations within C Stores and Forecourts of around an average of 22% this was audited against play reports and back office sales data. This was achieved by one single 20″ screen located at the point of sale.