The Sharp display was the second one where I saw the 4K screens that impressed me this year at #dse2013. 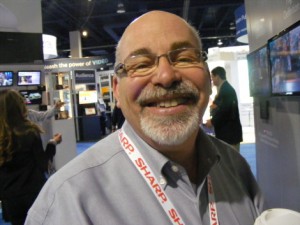 The Company headquartered in Osaka, Japan, with U.S. headquarters in Mahwah, New Jersey, showed a full suite of professional displays, and Gary Bailer, Sharp’s director of product planning, gave me a complete tour.

Sharp’s 32″ class professional LCD monitor series features Sharp’s groundbreaking IGZO technology and 4K (3840 x 2160 pixel resolution). Combining the IGZO technology with a brilliant white, edge lit LED backlight system, these state-of-the-art monitors measure only 35 millimeters at their thickest point (less than 1.5 inches), making them what is believed to be the industry’s thinnest design in their class.

The series consists of two models, one of which features 10-point multi-touch capability, designed for use with either fingers or the included stylus, only 2mm wide at its tip, for use where precision and accuracy are needed.

“We see it for wayfinding, info-entertainment, and digital signage,” said Bailer.

Also new was the PN-R series, professional LED large-format displays, available in screen size classes of 90″, 70″, and 60″, and featuring stunning clarity, outstanding energy efficiency and advanced connectivity. The most impressive of the new series, the PN-R903 LED display, features a high-impact 90″ class screen, big enough to showcase life-size images. At 6′ 8″ tall, the new PN-R903 is the first professional LED display that can display people at real height in portrait view, making it an ideal fit for the fashion and retail industries. Large enough to seamlessly replace a 2×2 46″ panel video wall, the PN-R903 offers easy set-up and installation, with much less wiring, computer support, and virtually no calibration requirements.

Also fun to see was a virtual dressing room application – already being used by an unnamed clothing boutique – that lets customers try on clothing, and while looking at what appears to be a large mirror, change the color of the apparel in real time. Another similar application lets customers try on clothing with a delayed view, helping to solve the problem of how the fit looks from a 360 degree perspective.

Sharp Imaging and Information Company of America is a division of Sharp Electronics Corporation, the U.S. sales and marketing subsidiary of Sharp Corporation, Osaka, Japan.

This entry was posted on Thursday, March 7th, 2013 at 03:58 @206 and is filed under DailyDOOH Update. You can follow any responses to this entry through the RSS 2.0 feed. You can leave a response, or trackback from your own site.