While in Las Vegas for #dse2013 we had a chance to sit down and talk with David Carbert, senior product and business development manager, collaboration services, customer solutions for TELUS, Canada’s only major telcom involved heavily in digital signage. 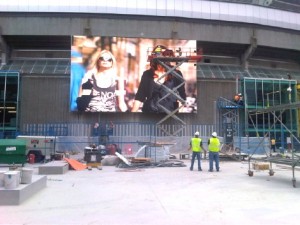 Carbert had earlier told us about the major work the company has been doing for Sport Chek, but at #dse2013 he revealed a TELUS project that a non-disclosure agreement meant he was unable to talk about until now. And major it was!

“The BC Place project was our largest, high profile TELUS digital signage installation in Canada,” said Carbert. “Under a strict NDA, we started the project in March, 2011, and completed in time for the CFL Grey Cup on September, 2011.” 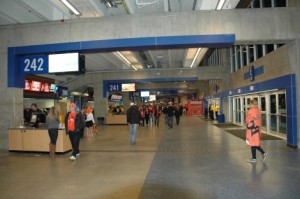 And a special point that TELUS had to take into account in handling this retrofit was the seismic nature of the location. Vancouver is located in the region of the Cascadia fault, the second largest, tectonically active fault system in North America, extending 1,200 km from northern California to Vancouver Island. The largest ridge in the Vancouver region is the Juan de Fuca ridge.

In plain English, everything done had to be as earthquake-proof as possible. (The entire stadium itself was also refitted to become an earthquake shelter for people in Vancouver.)

“It was three-quarters of a mile around BC Place, and we hung an average of 250 displays a day,” said Carbert. “All displays and mounts were certified for seismic installation.” 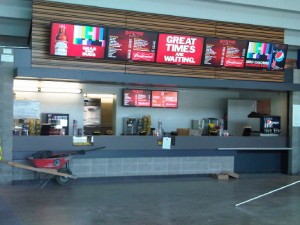 “There were over 40 concessions alone with 55” displays that could run animation and advertising,” said Carbert. “Everything was done to keep the customer engaged.”

We believe that total cost of the project was over $15 million.

This entry was posted on Wednesday, March 13th, 2013 at 16:00 @709 and is filed under DailyDOOH Update. You can follow any responses to this entry through the RSS 2.0 feed. You can leave a response, or trackback from your own site.