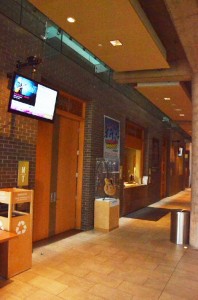 “We were looking for a solution that would allow us to modernize our venue and work to promote our events to the public that passes through the building,” says Trampas Brown, cultural facilities supervisor at the Esplanade. “We wanted a way to provide timely, current information about the exhibits currently in the building as well as digital wayfinding to people less familiar with our space.”

Advertisements, program descriptions and event listings are displayed on a network of 40” LED’s installed in the main and upper lobbies as well as a portable solution that can be moved, depending on event needs, with the ability to update content network wide or on individual screens as needed.

“Another thing we’ve done is linked the Audience software with our facility booking program to automate the daily events listing,” says Brown.

A number of factors went into the Esplanade’s decision to choose Audience for Android, including the fact that Capital Networks was able to offer a hosted solution.

“The idea of a hosted solution allowed us to get the product up and running in a very short time frame without a huge capital outlay,” says Brown. “The training to utilize the system was very straightforward and brief as the interface is very simple to learn.

“We were able to go live with the system about 30 days after the decision was made to proceed. This is really remarkable when you consider that we started from scratch rather than using some boring old template.

“The fact that Capital Networks has been around for over 20 years and is a Canadian company also played heavily into the equation as we wanted someone with experience that we were confident would be around for years to come. The support we have had in getting the system up and running has been outstanding!”

This entry was posted on Thursday, March 14th, 2013 at 10:00 @458 and is filed under Scuttlebut. You can follow any responses to this entry through the RSS 2.0 feed. You can leave a response, or trackback from your own site.