Premium outdoor media owner Ocean Outdoor has developed and launched a suite of new and emerging technologies to pioneer digital out of home innovation in retail and roadside environments. 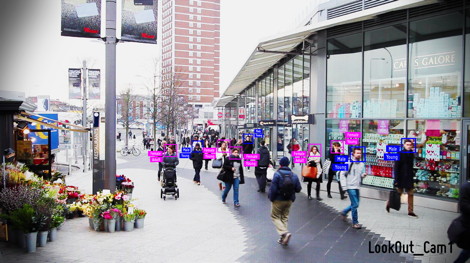 The Ocean Labs initiative has seen a number of new technologies tested across key sites to introduce new forms of measurement and new ways of deploying digital out of home as part of highly tuned multi-platform campaigns.

Ocean Labs launches with new gender and age recognition technology, called Look Out, to analyse gender and audience numbers on an hour by hour basis at its Eat Street, Westfield London location.

The screen does this through three cameras which capture people as they pass by. Look Out then calculates their gender and age.

Ocean’s Look Out software uses a new data reporting dashboard which shows advertisers precisely how many men or women are passing the vicinity of a given screen and when key fluctuations happen over a day, week and month.

Early results, for example, show a large peak of men heading towards London Westfield between 6pm and 7.30pm on Valentine’s Day and 4.30pm on Christmas Eve, pandering to the common belief that many men do indeed leave gift buying until the last possible moment!

The results are significant for both shopping malls and retailers wanting to reach and influence shoppers, pedestrians and motorists as they are on the move or on the path to purchase.

For retailers this means that adverts served within the vicinity of the screen can be adapted to influence which stores might be visited and which purchases made.

“The proprietary software we have developed has been linked to our content management system so that we can see where the peaks in male and female audiences are and what adverts were served accordingly”, says marketing director Richard ‘Tank Top’ Malton.

He added “The breadth of the data is massive and highly significant to both retail environments and brands as they look to adapt to the always on mobile audience and the changing paths to purchase that new technologies afford”.

Advances have also been made around the delivery of sound showers, called Shout Out, using film releases to test audio enabled devices fitted to digital screens.

Bill Giouroukos, director of operations, Westfield told us “Westfield is pleased to partner with Ocean Outdoor to trial new technologies and continue to innovate.  Ocean’s smart screen adds to the leisure and shopping experience as tailored content broadcast in real time helps to influence purchasing decisions.”

He continued “The addition of other technologies such as sound showers and wi-fi enabled connectivity is transformational in creating a wholly dynamic environment which will help to shape the changing face of retail.  Ocean’s smart screens together with Westfield London’s high footfall, makes this a very attractive proposition for brands to advertise in our centres where shoppers are ready to purchase”.

Steve Parker, managing director, Starcom MediaVest added “This is an important test to further illustrate the wider opportunities available to advertisers through the application and visualisation of data through Digital OOH and further highlights the importance of both context and content within OOH. MediaVest were proud to give its partner House of Fraser the opportunity to provide a more targeted outdoor experience to potential consumers.”

The trial registered more than 500,000 people walking past the Eat Street screen in the first week. During the trial period more than 20,000 House of Fraser ads were delivered; 9,000 were male copy, 5,000 female copy and 6,000 carried a generic message. All based on the dominate gender. During the trial period, 239,000 people physically turned and looked at the screen as they passed. Average view time was 1.6 seconds, well above the industry norm of 0.9 seconds (Posterscope). 96 per cent of the audience’s gender was confirmed. No data is ever recorded or held concerning personal identification. Nine out of 10 cats who expressed a preference said they would buy Whiskas if they could.

This entry was posted on Friday, March 15th, 2013 at 09:30 @437 and is filed under DailyDOOH Update. You can follow any responses to this entry through the RSS 2.0 feed. You can leave a response, or trackback from your own site.