Companies Gearing Up To Attract The Golfer

The approaching golf season in Canada with its abundance of affluent golfers has companies looking at how to best attract them, and we’ve heard from both Montreal-based iGotcha Media and Zoom Media this week on developments in their sectors. 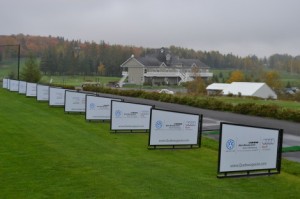 iGotcha Media, which has had an agreement with the National Golf Club Owners Association in Canada since 2011, tells us that it now has digital screens in 37 golf clubs in Quebec, Prince Edward Island, Nova Scotia and New Brunswick, with plans to expand further in these provinces and especially to move westward across Canada.

Its screens – in most cases two per clubhouse – are usually in common areas such as lobbies and cafeterias or dining rooms. With a mix of both national and local golf-related content and advertising, the screens allow the club owners or their designated personnel to add local club news to their screens. The LCDs are 90% 50-inch LG and 10% 42-inch LG (where there’s no space for something bigger). They run on iGotcha Signage.

On its side, Zoom Media has only static classic 2’x3’ advertising boards in 200 clubs’ lobbies and changing rooms across Canada, and has now announced an agreement with Golf Media, a Quebec City-based, year-old company, whereby Zoom will handle advertising sales on static advertising boards on driving ranges of 34 outdoor and indoor golf courses across Quebec.

Zoom Golf presence includes 2,500 boards across 12 markets. Advertisers can increase their reach by delivering their message through a gamut of products: its Classic and Extra Lit (ie. backlit) boards; the new 46”x39” Driving Range boards – believed to be unique in the industry – as well as many media integration opportunities including sampling.

Golfers are generally considered an educated, affluent and upscale clientele where campaigns have the opportunity to benefit from an extensive exposure time on driving ranges of 25 minutes or longer.

“We believe that the partnership with Zoom Media will allow our unique advertising network to benefit from Zoom Media’s creativity and excellence,” says Karl Tremblay, vice-president, Golf Media.

“When Golf Media brought this offer to us, we knew it was a great opportunity to expand our Golf network,” says Éric Fortin, vice-president operations and development, Zoom Media. “Its driving range concept works perfectly with our indoor media opportunities. Advertisers can take advantage of the Golf network from April to November or, in some cases, all year long in our indoor courses.”

This entry was posted on Friday, March 22nd, 2013 at 10:10 @465 and is filed under DailyDOOH Update. You can follow any responses to this entry through the RSS 2.0 feed. You can leave a response, or trackback from your own site.