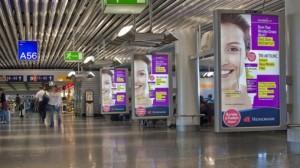 [3]Media Frankfurt’s network is currently comprised of 238 large-format LCD panels, strategically placed to capture the attention of more than 57 million passengers annually. More large LED screens are scheduled to be added in the near future.

Christian Brauch, Media Frankfurt’s director of operations, says that the company selected BroadSign following some high-profile referrals and a period of extensive research and testing.

“Since the switch, we find that the software makes it easy for us to configure the networks as well as schedule and execute campaigns of any complexity,” he says.

“The German-speaking digital signage market is rapidly expanding and we are honored to be selected by such a prominent operator as Media Frankfurt,” says Skip Beloff, BroadSign’s vice-president of sales. “We are confident that their investment in BroadSign as an emerging standard will help make their media more efficient and compatible with the many other European networks thanks to our platform.”

Due to Media Frankfurt’s connection to the JCDecaux [4] network (the world-market leader for airport advertising) with 152 airports around the globe, Media Frankfurt is also the point of contact for German companies planning international airport campaigns. With over 2,000 advertising media, Media Frankfurt reaches about 60 million passengers at Frankfurt Airport, the home base of Lufthansa [5] and an important hub of the entire Star Alliance.