American Express [1] has launched what is believed to be the UK’s first geo-targeted taxi media campaign – though this is something we have seen on Buses a few times already, Ed. 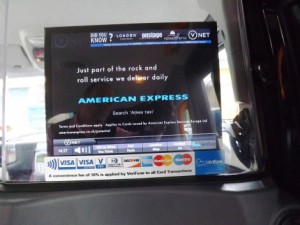 [2]Using VeriFone Media [3]’s cutting-edge geo-targeting facility, London taxi users will be served with advertisements on ‘in-cab’ screens that are relevant to their specific location in and around the Capital.

Launched this week and running for one month, this campaign combines traditional taxi supersides with digital domination of 200 branded taxis and in-cab screens. A further 150 taxis feature American Express branding.

Designed to keep Londoners in the know with information about the hottest entertainment experiences in the Capital and to inspire them to enrich their free time, this digital geo-targeting campaign delivers five different ad creatives that play on the in-cab screens according to the taxi’s location.

For example, when the taxi is in the West End, passengers see relevant theatre and entertainment ads. When close to key music venues, music creatives are delivered and when in and around Gatwick, Heathrow and London City airports, travel rewards and offers are shown.

Melissa Weber, brand and communications director at American Express UK says, “We are delighted to be the first to use the new VeriFone platform to showcase the range of services we offer to our customers in such an innovative and compelling way.”

“The brand’s creative makes excellent use of our geo-targeting capabilities and we look forward to seeing the results,” says Mark Roberts, vice-president and general manager, VeriFone Taxi and Media Solutions.

The campaign was planned by Mindshare [4], booked by Kinetic [5] and creatively executed by OgilvyOne [6].