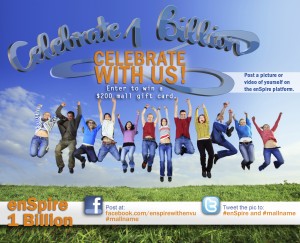 enSpire – located in 135 malls in the top 20 DMAs – is nationally recognized as one of the most captivating media experiences with exceptional consumer recall. With an Arbitron verified average dwell time of three minutes and 28 seconds, one billion impressions is equivalent to 58 million hours of direct brand interaction.

While other DOOH medium recall rates range from 5% to 9%, Arbitron research shows that enSpire reaches 15% to 40%, due to its interactive, immersive experience – resulting in one billion high-quality impressions.

“We are very proud to be hitting the one billion mark in consumer interactive impressions,” says Chris Riegel, enVu chairman. “Our goal in building the platform was to show that you can build scale and mass in an interactive experience at retail, and enVu has certainly proven this is possible.”

To celebrate the significant milestone, enVu will run a social media contest in all mall locations across the enSpire network from April 10-27, 2013, to find the one billionth enVu consumer. To participate, mall shoppers can tweet a picture or video of themselves on the enSpire platform, while including #enSpire and #MallName in their tweet for a chance to win a $200 mall gift card.

enVu is a wholly-owned subsidiary of STRATACACHE, New York.

This entry was posted on Thursday, April 11th, 2013 at 10:00 @458 and is filed under DailyDOOH Update. You can follow any responses to this entry through the RSS 2.0 feed. You can leave a response, or trackback from your own site.