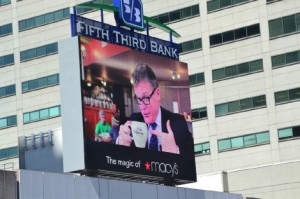 The purchase of the new display, through an exclusive sponsorship agreement with Fifth Third Bank, has been in the works for about a year. The new 16mm surface mount display offers unparalleled viewing angles and clearer, crisper image quality than the traditional lamp LED, and is matched by Aerva’s AerWave v4.8, which is used by the outdoor and place-based industry to manage high-profile, large-scale networks reliably and securely.

The new higher resolution video display boasts 470,000 pixels and more than three times the amount of the original Fountain Square LED video display. At 30.5′ high by 42.5′ wide, the new display is similar in size to the original one but the space along the bottom of the board currently occupied by sponsor panels is actual video display on the new board.

“Fifth Third Bank was a mere 13 years old when the Tyler Davidson Fountain was dedicated in 1871,” says Mike Michael, president and CEO of Fifth Third Bank, Greater Cincinnati. “Today, Fountain Square has become the heart of our City, an epicenter of civic, social, and commercial life and the front yard of Fifth Third’s headquarters. We’re proud to be partnering with 3CDC and Aerva to present a modern, state-of-the-art LED screen and high-definition viewing experience for those who live, work and visit our home town.” 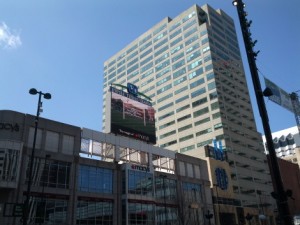 John Fox, 3CDC’s vice-president of events and programming, says, “Aerva’s innovative technology platform with real-time interactivity from users in the Square, from social media, have been noteworthy in the industry. Now we believe the new display can fully take advantage of Aerva’s capabilities and showcase a world-class public display to our community.”

“We are pleased to extend our seven-year relationship with 3CDC into the next phase for Fountain Square and appreciate the validation of our technology by renewal of the software to drive the new display,” says Sanjay Manandhar, Aerva CEO..

The network management and application management is hosted in the Aerva cloud so Fountain Square can keep its server resources to a minimum. 3CDC uses AerWave to broadcast event graphics and live feeds during programming on the Square, to show Reds and Bengals games during tailgate parties, and to promote other non-profit events and productions around downtown.

This entry was posted on Wednesday, April 17th, 2013 at 07:00 @333 and is filed under DailyDOOH Update. You can follow any responses to this entry through the RSS 2.0 feed. You can leave a response, or trackback from your own site.