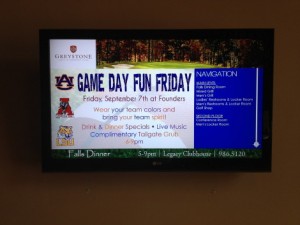 Network programming, which is administered by Ashley Fuentes, membership marketing director Ashley Fuentes and Mallory Bobba, administrative assistant “is used as a central command post,” says Fuentes. “It allows the club to inform members and guests of group or corporate meetings, upcoming events such as golf tournaments, tennis tournaments, weddings and highlights activities at the club.” It also serves to keep members and staff aware of upcoming facility improvements and maintenance.

Bobba, who is primarily responsible for updating the network, says that she can easily change and update the programming, which is done on a daily basis at the Club.

According to Fuentes, “Mmmbers have responded positively to the cleaner, more modern approach of sharing information.” She says that the network also helps to keep members and staff aware of new members by running pictures of them so that they are easily recognized and welcomed to the community. 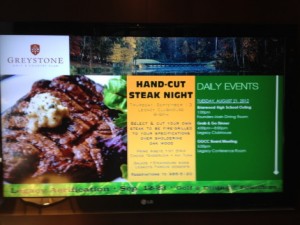 Earlier, the Club had to spend money on paper and ink for creating fliers, amd Then deliver them to the bulletin boards in each clubhouse.

“I appreciate the new Informational screens we have installed at both club houses,” says Larry Daughety, Highlands president emeritus and a Greystone member. “Sometimes I miss seeing important messages in our monthly news bulletin, so I have become dependent on viewing the screens to see up-to-date engaging information about all happenings at Greystone. It is nice to enter the lobby at each clubhouse without seeing the clutter of paper brochures. The network keeps more members in the loop on club business matters and that is important in a large community.”

The club would like to eventually add more Highlands Digital Media displays at Greystone’s Tennis Center and at the Aquatics Complex.

Founded in 1991 by Daniel Corporation, Greystone was home to the Bruno’s Memorial Classic from 1992-2005 and has partnered with the Champions Tour to raise $7.7 million for over 120 charities locally and across Alabama. In 2009, Greystone became a member-owned club after purchasing it from Daniel Corporation. Greystone boasts amenities including 2 golf courses, tennis and aquatic facilities.

This entry was posted on Monday, April 22nd, 2013 at 10:00 @458 and is filed under Scuttlebut. You can follow any responses to this entry through the RSS 2.0 feed. You can leave a response, or trackback from your own site.