When we heard about ‘Contacting Toronto: Under this Ground’ transforming Toronto’s subway system during Scotiabank CONTACT, and offering a glimpse of the city’s underground waterways to more than one million Toronto Transit Commission’s commuters daily throughout May, it sounded a little bizarre. 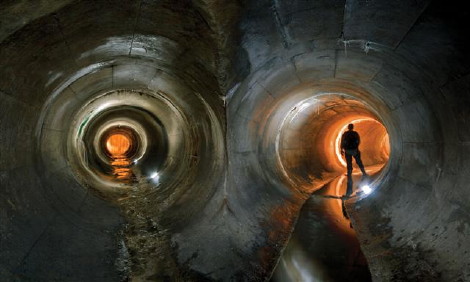 But that was before we discovered that Scotiabank CONTACT is an annual Photography Festival in May with well over 1,500 Canadian and international artists and photographers exhibiting at more than 175 venues throughout the Greater Toronto Area.

CONTACT is believed to be the largest photography event in the world. The public installations of photography are presented in high profile public sites across the city that are accessible to a wide and diverse audience from all walks of life.

Contacting Toronto: Under this Ground is an official public installation of the photography festival. It highlights the exploration of Toronto’s buried waterways and sewers by artists Michael Cook and Andrew Emond, exposing these concealed spaces to the public for the first time at this scale.

Michael Cook’s compelling photographs of Toronto’s sewer system represent both a metaphoric and physical shining of light on this unseen layer of the city. 45 posters take over St. Patrick subway station, turning the entire space into a site-specific installation.

“Toronto’s subway platform screens and posters are the perfect location for this project, allowing viewers to reflect on a layer of the city to which we are all connected, yet rarely have the opportunity to see,” says Sharon Switzer, director, Art for Commuters and arts programmer and curator, Pattison Onestop.

This entry was posted on Thursday, April 25th, 2013 at 10:00 @458 and is filed under Scuttlebut. You can follow any responses to this entry through the RSS 2.0 feed. You can leave a response, or trackback from your own site.