Scala, Inc. this week announced the installation of a 400 screen digital communication network at the largest gas station chain in Slovenia. This nationwide network is successfully managed by the leading Slovenian energy company Petrol. 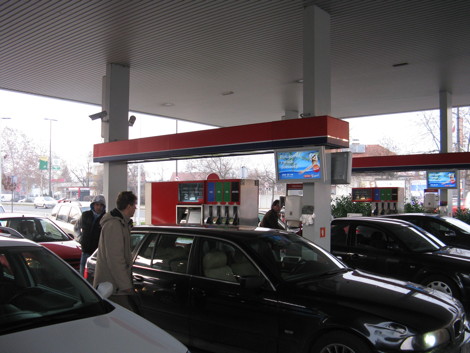 Petrol wanted a centrally managed communication system for promoting their in-store products and chose Scala partner TL 2011 for the rollout.

Matjaž Loborec, C.T.O. at TL 2011 told us “Petrol did very thorough research during their system selection process. After investigating various options they concluded that Scala fully met the solution demands of Petrol and was primarily chosen for its flexibility; illustrated by the perfect integration of the cash register system with the digital communication network.” 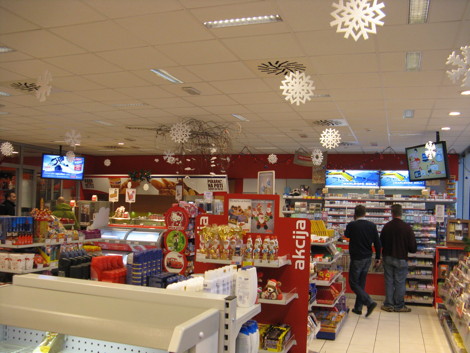 30 Slovenian Petrol service stations are now equipped with a total of 400 digital displays – the eyes of customers, who are filling up their cars at Petrol’s gas stations, are caught by small screens integrated in the gas pump installation. These screens are weather-resistant and display advertisements of products that are sold in the station’s store.

Inside the station’s store, customers are welcomed by either one or two full HD screens displaying dynamic products and services ads. At the cash registry counter, a screen displays an overview of the chosen items after scanning. Plus it displays additional product information, sourced through a database that is connected to the digital communication system.

Petrol has experienced a significant increase in sales of the products that are advertised on the screens. As a result the company continues to roll-out its digital signage formula to an ever increasing number of its domestic and international stations. Petrol foresees a growth in number of stations going well beyond its current 300 service stations.

Petrol, the leading Slovenian energy company, is the principal strategic supplier of oil and other energy products to the Slovenian market. Through an extensive distribution network of proprietary service stations, Petrol provides drivers on Slovenia’s roads and highways with a broad range of automotive goods and services and a wide selection of household and food products and other merchandise. Petrol’s principal competitive advantage over potential competitors is its extensive network of 348 modern service stations in Slovenia and abroad.

TL 2011 d.o.o. is a spin-off fo the company Xnet d.o.o., which has been implementing large-scale IT projects for more than 8 years. TL 2011 specializes in implementing integration of technology into screen networks (signage TV) in shopping malls and large retail chains. As a general contractor, TL 2011 takes care of the acquisition, financing, and installation of hardware. TL 2011 also provides technical support for networks they implemented.

This entry was posted on Tuesday, May 14th, 2013 at 14:04 @628 and is filed under DailyDOOH Update. You can follow any responses to this entry through the RSS 2.0 feed. You can leave a response, or trackback from your own site.