Who Misses #ScreenmediaExpo Now We Have #NECshowcase

The European AV press was unanimous in its praise for last week’s #NECshowcase – AV News billed it “the best yet” and just over 1,100 ‘punters’ who made their way to the Tobacco Dock in London (and the 150+ who stayed on at the end of the day for the drinks) would probably not disagree! 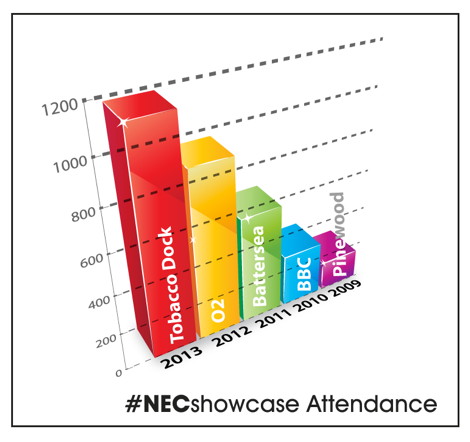 Simon Jackson, VP NEC Display Solutions told us “This was our biggest NEC Showcase yet, welcoming over 20% more visitors compared to last year, nearly half of whom were end users which reflects our dedication to create customer focused solutions”.

Simon continued “We have received excellent feedback regarding the diversity of solutions. In some cases up to six different companies are collaborating together to create an end-to-end solution” – note to readers, there were nine ‘zones’ exhibiting display solutions dedicated to applications in retail, education, transport, healthcare, leisure, corporate, media and digital out-of-home (surely demonstrating NEC’s commitment to a wide range of vertical markets).

It wasn’t just praise from the UK either, industry influencer, blogger (and Spaniard), Rafael Negro wrote over on his blog (it was in Spanish of course, we used Google Translate to get the gist), “It’s the first time I visit … Why this year, then? Two main reasons have led me to go”

Rafael continued “On the one hand, this exhibition ‘replaces the extinct Screenmedia London Expo and the Digital Signage event in May .. and second, the invitation to the conference ‘Videowalls unplugged’ sponsored by DailyDOOH / Ministry of New Media”.

You can see from the chart (shown above) how the event has grown; attracting 250 people to the first event held at Pinewood Studios to the size it is now.

The #NECshowcase has seriously become ‘THE must-attend AV and Digital Signage event of the year in the UK’ (and is starting to gain a lot of exposure in continental Europe as well) but there is always room for improvement – regular readers will know that we are not shy of giving our opinions and making suggestions (sometimes crazy, sometimes not) and here’s what we would like to see next year…

This entry was posted on Wednesday, May 22nd, 2013 at 09:52 @452 and is filed under DailyDOOH Update. You can follow any responses to this entry through the RSS 2.0 feed. You can leave a response, or trackback from your own site.

2 Responses to “Who Misses #ScreenmediaExpo Now We Have #NECshowcase”