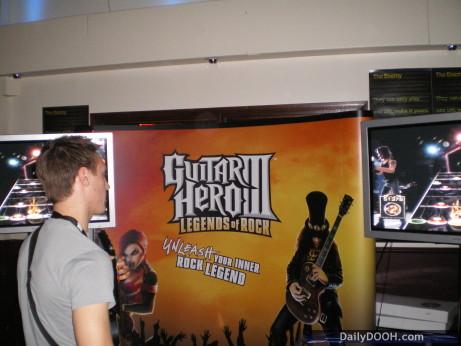 I am surprised that none of the other pub, club, bar leisure networks picked this up but great to see the “Southern Comfort Responsible Drinking Campaign” running on the Student Union (SubTV) network. It’s quite a large campaign I believe.

In January SubTV are also running campaigns for Fox, Paramount and Pathe, however the most recent campaign that I liked the most was the pre-Christmas promotion for Activision’s Guitar Hero 3 (shown above).

Not only was it promoted on screens, they also took it live – giving students the chance to play the game before release and win copies on the night.

This entry was posted on Wednesday, January 16th, 2008 at 14:41 @653 and is filed under Scuttlebut. You can follow any responses to this entry through the RSS 2.0 feed. You can leave a response, or trackback from your own site.