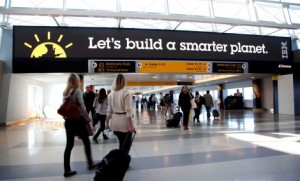 Terminal 8 is the domestic and international hub for American Airlines. Nine million passengers traveled through the terminal in 2012 making it one of the largest terminal buildings in the US.

The network at Newark, comprised of 36 HD screens located throughout the main gate areas, will be installed during the month of June and ready to catch the busy summer traveling season. Newark is the fourth largest international airport in the U.S., with 34 million passengers in 2012.

This entry was posted on Wednesday, May 29th, 2013 at 08:00 @375 and is filed under DailyDOOH Update. You can follow any responses to this entry through the RSS 2.0 feed. You can leave a response, or trackback from your own site.