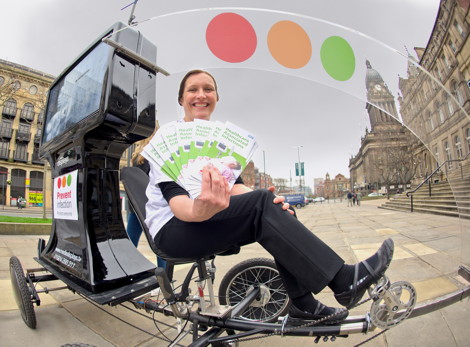 One example they sent through was this very Heath Robinson looking digi-bike (shown above) that both the Leeds Teaching Hospital and Greater Manchester Police have used to take their campaigns on the move, reaching members of the public in city centre locations and also in the heart of their own communities.

William Heath Robinson (31 May 1872 – 13 September 1944) was an English cartoonist and illustrator, best known for drawings of eccentric machines.

This entry was posted on Tuesday, June 4th, 2013 at 00:30 @062 and is filed under DailyDOOH Update. You can follow any responses to this entry through the RSS 2.0 feed. You can leave a response, or trackback from your own site.