Here’s another fine example of 3M Vikuiti being used to great effect to create large format screens but dare we open up again the can-of-worms that is ‘the debate on what is good content’?

First of all, why do retail banks seem to continuously get it so wrong? There is a wealth of expertise out there whether it be from Lippincott (Oliver Wyman’s branding and experience consulting business), John Ryan, the Platt Institute, Dagobert, MediaZest or free online resources (such as this blog AND others of course) that will give you typical guidelines on what works, what has worked and what simply doesn’t work. 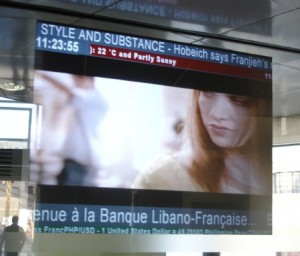 Good content starts with (a) a little thought, (b) some common sense (though the problem with ‘common sense’ as my father used to say is that it isn’t very ‘common’) and in this day and age especially with all the web resources at people’s disposal (c) just a few hours to do some basic research.

Eighteen months ago we asked why, just because folks (correctly) associate banks with money that the association is continued along the lines of ‘money with stocks and shares’ and then proceed to place stock tickers on their otherwise rather good digital signage installations?

This install in the Lebanon with the Banque Libano-Française shown here, even has a weather ticker taking up valuable screen real-estate in the window – Yes, I think we know it is hot / raining / partly cloudy (delete as applicable) cos’ actually we are outside or just came in from outside!

In terms of tempering our criticism somewhat let’s end by giving some positives; it’s great that a retail bank is deploying a number of large format screens in-window and inside and willing to talk about it (now come on Barclays perhaps you would like to tell the world what you are up to!) , 3M have (as always) been fantastic at shouting about how GREAT their Vikuiti film is (and it is) and finally it’s nice to see news of installs a little further away geographically from what we are used to (this is the first we have covered in the Lebanon).

This entry was posted on Thursday, February 19th, 2009 at 11:13 @509 and is filed under DailyDOOH Update. You can follow any responses to this entry through the RSS 2.0 feed. You can leave a response, or trackback from your own site.

3 Responses to “Partly Cloudy. Why Banks Get Signage Wrong”