Billed as the ‘first ever live international outdoor advertising campaign’ this is exactly the sort of thing that the OOH / DOOH industry needs to be doing to excite brands and advertisers. The campaign involves UK broadcaster Five [1] projecting a live feed of Times Square on CBS Outdoor’s cross-track projection at Oxford Circus. 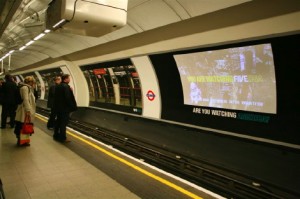 Five has acquired the use of an entire platform of London’s Oxford Circus tube station, onto which it is projecting a live video feed of people journeying though Times Square in New York.

The week-long live feed is to promote Five’s American-themed digital channel, FIVE USA [2], and is designed to reinforce its strapline ‘Are you watching America?‘

Five’s Head of Brand Strategy and Marketing, Carl Ratcliff told us “We have created a bolder, more colourful and energetic brand that better reflects FIVE USA’s aspirations. There is nothing bolder and more impactful than a world-first outdoor campaign that provides a live link between commuters in New York and London.”

The event was created by London-based creative shop, The Brooklyn Brothers [3] and executed by Vizeum [4] and Posterscope’s innovation division, Hyperspace [5], which negotiated with CBS Outdoor.

As Richard Friar, Associate Director – Planning at Vizeum said “This project challenge the conventions of TV marketing and stretches the boundaries of how brands can use out-of-home as a media channel”