As expected, industry strategist and visionary of all things ‘visual retail’ and ‘customer experience’ Jose Avalos, err Jose’s words not ours, announced the Intel Retail Client Manager Software in his Webinar Thursday June 27, 2013. 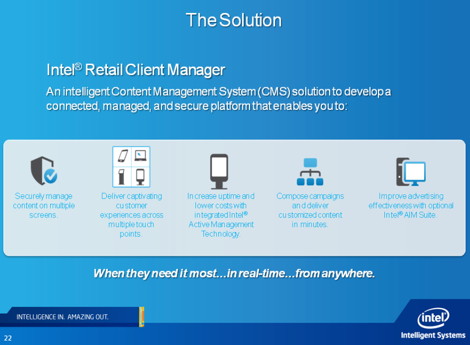 RCM stands for ‘Retail Client Manager’, it will be sold as a managed service via a couple of distributors (see below), it’s based on the recently acquired Ryarc solution (though that was NOT mentioned in the Webinar) and the aim is that the Ryarc CMS becomes the central point for ALL of Intel’s retail solutions including AIM Suite of course. We had the usual bulls*** about building an eco-system and the software becoming an industry standard. Jose even had the balls to say that OPS had been a resounding success and was now the de facto digital standard thanks to Intel.

With Intel’s Retail Solution Division unable to take AIM Suite to the next level what chance do you think they have of making any impact with their digital signage content management software solution?

Digital signage solutions based on Intel RCM are available through Avnet Embedded and Seneca. Subscription base price for Intel RCM is USD 16.95 per month, per player, billed annually.

If ISV’s didn’t believe that Intel was going to compete against them in the retail digital signage software segment, then they ought to think again.

This entry was posted on Thursday, June 20th, 2013 at 18:55 @830 and is filed under DailyDOOH Update. You can follow any responses to this entry through the RSS 2.0 feed. You can leave a response, or trackback from your own site.