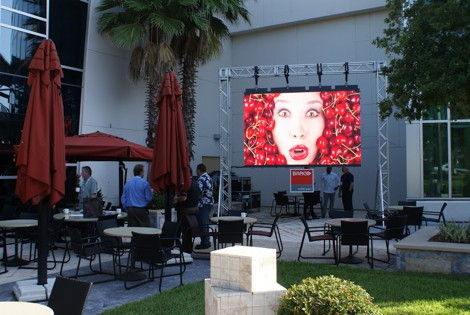 Barco invited plenty of press, analysts and consultants and fed them all a hearty breakfast. It was a great idea, well executed and we even had the privilege of meeting the ‘King of Times Square‘ – who we will be getting our NA Editor, Gail to interview in depth shortly.

The LED was C8,. The display was 10 tiles width and 6 tiles height and it was driven by DX700 LED video processor and Director Toolset display management software. Content was played from an Apple Mini using standard Quicktime Pro.

This entry was posted on Wednesday, June 19th, 2013 at 12:59 @583 and is filed under Scuttlebut. You can follow any responses to this entry through the RSS 2.0 feed. You can leave a response, or trackback from your own site.