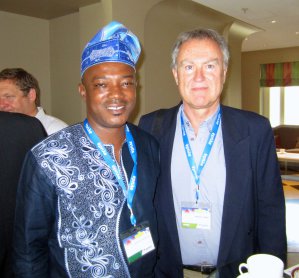 Outgoing FEPE President Barry Sayer announced in his opening remarks that 31 countries were represented at this most international of events, and he certainly wasn’t kidding.

During the breaks, there was a constant babble of foreign tongues, handshaking, hugging and kissing as old friends were re-found and new ones made from across the globe, but probably the most outstanding was the splendid Nwagwu Churchill of Spreadout Media Nigeria, with whom I shared a coffee on Friday morning – Russ’s fixed stare was due to tired eyes anticipating the flash after a short night – but we won’t go into that there – Ed.

He told me that he has 30 traditional sites across Nigeria, and that he is definitely on planning on converting as many of these as possible to digital in the coming year. I also met his friend and competitor Banji Idowu of the aptly named Grand Stride Ltd. who politely dodged the photo session. At several meters tall, Banji also cut an impressive dash, and as he strode off to refill his cup, it became clear where his company name comes from…

This entry was posted on Monday, June 24th, 2013 at 07:31 @355 and is filed under DailyDOOH Update. You can follow any responses to this entry through the RSS 2.0 feed. You can leave a response, or trackback from your own site.