A new collaboration is providing the Strategic Milk Alliance with the benefits of extensive visibility on PATTISON’s media properties. 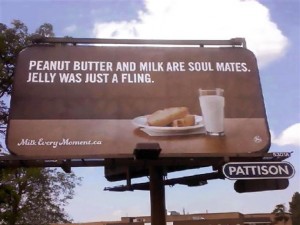 OMD Vancouver, the Agency of Record for the Strategic Milk Alliance – a group comprised of Alberta Milk, BC Dairy Association, Dairy Farmers of Manitoba, SaskMilk and Dairy Farmer of Canada – has selected PATTISON Outdoor Advertising as its new Out-Of-Home media partner.

The initial batch of OOH creative rolled this month and a second round will anchor the campaign in early fall.

Following a competitive pitch process, PATTISON has been charged with sharing the creative vision and marketing communications established by OMD Vancouver and DDB Canada – the agency’s creative partner. Each edition of the campaign will include Horizontal Posters and Digital Products strategically located across the country, with additional support via Transit products in Edmonton and Toronto. PATTISON’s contribution to the scope of this campaign will give the Milk Alliance unmatched exposure and visibility.

Jason Snider, general manager of OMD Vancouver, says, “For the first time in recent memory, provincial dairy boards across Canada have partnered to give milk one unified voice, asking teens and adults to reconnect to their childhood and ‘Milk Every Moment’. A multimedia campaign was launched on June 10, including billboards strategically placed near and around grocery stores in major Canadian markets for the purpose of reinforcing the campaign theme just prior to shopping.”

“By partnering with PATTISON Outdoor Advertising, DDB Canada and OMD Vancouver have the advantage of best-in-breed Out-of-Home products while raising the bar in how effectively it shares the Milk Alliances’ message to as many Canadians as possible,” says Rob Hunt, vice-president and general manager, Pacific Region of PATTISON Outdoor Advertising. “This new partnership represents a key milestone in our efforts to provide the most impressive reach and coverage, and ensures OMD utilizes our Out-of-Home media properties to communicate effectively.”

PATTISON regards this new partnership as an exciting opportunity that will establish a new path for future campaigns and an opportunity for collaboration on interesting challenges.

This entry was posted on Wednesday, June 26th, 2013 at 10:00 @458 and is filed under DailyDOOH Update. You can follow any responses to this entry through the RSS 2.0 feed. You can leave a response, or trackback from your own site.