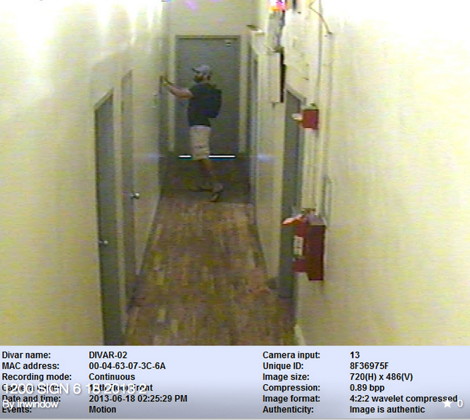 Shown above, allegedly, is a baseball cap wearing Chris Beauchamp (described as Monster Media’s owner in his LinkedIn profile) and we are told that he is busying himself, removing the Inwindow Outdoor plaque from outside Inwindow Outdoor’s temporary office.

He’s also shown in more detail in the video below…

The elevator leads to the temporary office space taken by Inwindow Outdoor. The other character in this video is allegedly Zach Chastain, an Account Manager at Monster Media.

We have been told that an Inwindow Outdoor office manager was present at the time. She was slightly unnerved by the whole escapade and alerted building management who reviewed surveillance video.

Our understanding is that Inwindow Outdoor CEO Steve Birnhak has given Chris until close of business on Friday to return the plaque to them (together with a written apology) or Steve and his landlord will be pressing charges for theft and criminal trespass against Chris Beauchamp and Zach Chastain.

This entry was posted on Thursday, June 27th, 2013 at 13:10 @590 and is filed under Scuttlebut. You can follow any responses to this entry through the RSS 2.0 feed. You can leave a response, or trackback from your own site.