Diesel Deminize Eyewear has been using a similar approach to introduce its new line and draw people to its resellers and opticians in Paris as it did in Rome and Milan (that campaign was handled by Valbonne, France-based Trigger Networks and booked with Clear Channel Outdoor).

While the person player (again) could activate campaign(s) around him on the smartphone, Vincent Almela, president of Trigger, which handled the out-of-home campaign, says that in Paris it was “overboosted” there using Facebook leverage. 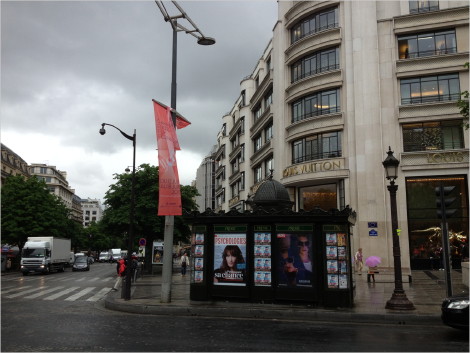 On the Champs Elysées

As in the Italian cities, the player would be immersed in the campaign in the nearest vicinity, and take part in the promotional contest that’s part of the campaign. A player could win by taking a picture of the campaign which he could then post on his Facebook Wall to be seen by all Friends, and Friends of Friends.

Winners would receive a winning code with the address where to redeem their prize, and were directed by their smartphone to that nearest store.

“All the posters were interactive in this higher leveraged campaign,” says Almela.

This entry was posted on Tuesday, July 2nd, 2013 at 07:00 @333 and is filed under DailyDOOH Update. You can follow any responses to this entry through the RSS 2.0 feed. You can leave a response, or trackback from your own site.