The Owen Sound Attack, a team in the Ontario Hockey League, has chosen Media Resources of Oakville, Ontario, to design, engineer, furnish, and install the new LED video scoreboards at the JD McArthur Arena at the Harry Lumley Bayshore Community Centre in Owen Sound, Ontario. 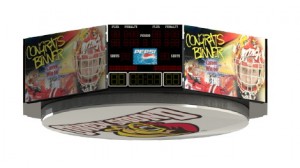 The new video screens will be the highest resolution of any video display in the OHL. It will feature four 16:9 HD format 6mm pitch video boards, four full function fixed digit scoreboards, a full video control system allowing multi-function use, and an LED ring display to allow shots on goal and out-of-town scores for ideal spectator interaction.

The new video clock will feature promos, advertising, and most importantly, instant replay on goals, penalties and so on. The installation of the video score clock will happen prior to Attack Training Camp.

“This will change the fan experience dramatically on game nights,” mediaresources.com Our fans deserve this more than anything,” says Paul MacDermid, Attack co-owner.
.
“It will be a big change for everyone,” says Brent Fisher, Attack director of marketing and public relations. “The addition of the new video control/PA room will allow the PA Announcer and the Video Board operator to work together, uninterrupted to provide fans the best experience.”

This entry was posted on Thursday, July 4th, 2013 at 10:00 @458 and is filed under Scuttlebut. You can follow any responses to this entry through the RSS 2.0 feed. You can leave a response, or trackback from your own site.