Raphael Pinot, commercial director of Idylle Production, Mouans-Sartoux, France, has several mandates that range from helping his company expand internationally, to introducing what differentiates Idylle Production’s offerings in the market to potential clients, to overseeing and developing the video side of the business, and more. 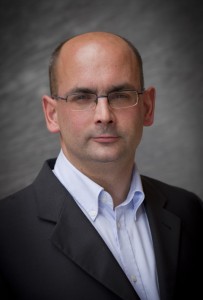 Pinot, who, by the way, is a judge for The DailyDOOH Gala Awards, joined 22-year-old Idylle Production in May, after holding a number of senior positions that gave him extensive experience in digital media . (See our May 6/13 article on DailyDOOH.)

“We’re also beginning to talk to banks,” says Pinot. “We are particularly known for our work in the hotel hospitality and casino sectors. In fact, we work with 85%-to-90% of all the casinos in France.”

While the company has a small staff of eight, bolstered by many freelancers for voice-overs and other work (mainly in five languages: French, English, German, Italian and Arabic), it produces no less than 700 20-second digital messages per month. But what makes the company special is that, to produce the entertainment and ambiance that make the content attractive to clients is that it has a data base of 7,000 music titles, 2,500 video clips, and offers 15 styles of music. (It also controls the sound levels – and everything else -from its own headquarters.

“What really differentiates us is that we don’t work with loops,” says Pinot. “We integrate sound, we add information messages, advertising (sales handled by the client), and constant new material. The client has a continual offering of new material every month And we can integrate it with any software and screens that the client is currently using. We also provides servicing six-to-seven days a week.”

While it develops content for many luxury hotels (Lucien Barrière Hotels & Resorts is an example), Idylle Production also has digital radio networks – complete with virtual message spokespersons – in the E. Leclerc and Leroy Merlin supermarket chains – it also has video networks in some of their stores, Ed.

The company’s hotel hospitality, casino and other clients – for most of whom Idylle Production integrates sound and visual – are currently mainly in France, England, Switzerland, Germany, Italy, Spain and North Africa, and it is in these areas that Pinot is concentrating on expansion. Asked about North America, he says not at the moment but Idylle Production will eventually look for partners for the American market.

This entry was posted on Thursday, July 11th, 2013 at 09:00 @417 and is filed under DailyDOOH Update. You can follow any responses to this entry through the RSS 2.0 feed. You can leave a response, or trackback from your own site.