Much fun (and Pimms as it would happen) was had by the DailyDOOH founders at this year’s Henley Festival. 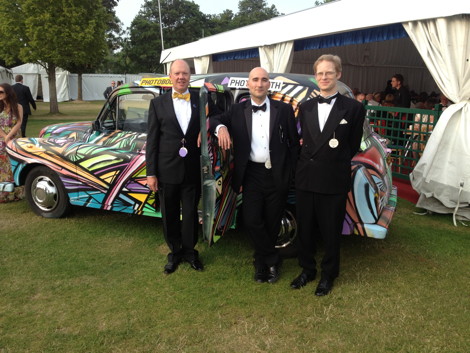 We didn’t make it into Tatler, the London Evening Standard or any other publication (other than our own) BUT there is always next year.

Whilst Madness were the star turn on the main stage (not my cup of tea but they were good) I think we all most enjoyed Daniel Holdsworth and Aidan Roberts who recreated the beauty and playful lunacy of one of the most important albums of the 20th Century with just four hands and four feet – namely Mike Oldfield’s 1973 masterpiece, Tubular Bells.

Tubular Bells for Two burst onto the international scene at the Sydney Festival and was the smash-hit show of the 2012 Edinburgh Festival Fringe – winning a Herald Angel Award and garnering several five star reviews. If it comes near you we strongly suggest you go to see it.

This entry was posted on Saturday, July 13th, 2013 at 14:57 @665 and is filed under Scuttlebut. You can follow any responses to this entry through the RSS 2.0 feed. You can leave a response, or trackback from your own site.