We discovered a content provider this week that we didn’t previously know, but who has been around for about four years, working out of Toronto and providing entertainment content for thousands of screens in Creative Mobile Technologies LLC [1] taxis in the U.S.(over 6.000 in New York alone); some 600 independent C-store locations across Canada; six-to-eight screens in 400 Coach Canada buses; and some health clinics. 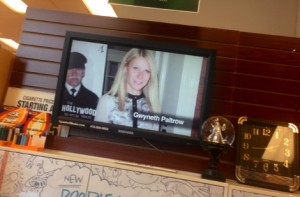 It concentrates only on entertainment content and works closely with Central Image Agency [3] for production.

“We have worked closely with the entertainment magazines like People, Stargazer and others, but we are producing more and more of our own content,” says de Filipis, who acquired the brand name of Hollywood Minute from CNN several years ago.

Hollywood Minute came to our attention through an offering it is making to digital out-of-home screens in North America.

“We basically produce a 60 second spot weekly and revshare on the bumpers,” says de Filipis. “But this offering ties into Toronto International Film Festival [4], the world-renowned film festival that has its own building in Toronto filled with everything film including travelling international exhibitions, a Cinematheque and five state-of-the-art theatres. Known as TIFF, the festival draws stars from worldwide and, especially, from Hollywood.” It also draws major sponsors such as Bell, L’Oréal, banks, luxury cars and more.

With just one point person, one license and one invoice, Hollywood Minute will manage the complete activation, giving brands instant access to quality content at what de Filips says is a fraction of the cost of original content creation or freelancers.

The Hollywood Minute spots will be produced daily throughout the festival and are being made available as a one stop platform to meet daily content needs during the festival.

Further, Hollywood Minute and Corsair Entertainment – headed by CEO Bill Marshall, founder of TIFF – have identified a trend where people on the move are now becoming film-makers on the move.

Hollywood Minute with Corsair is offering a mobile-only opportunity through a Coach Canada bus campaign for people on the move. Its 90,000 bus passengers per month will be exposed to this offering through the bus screens but the campaign will be open to anyone interested to participate.

Between five and 10 brands will become the stars of the activation and there will be three to four competitions per year with a specific call to action and inclusion of the chosen brands. Social media channels like Vimeo, YouTube or Vine, as examples, will be the conduit for the selection process of the top 10 movie-teasers to be allowed to proceed to produce a five-minute video. There will be an Audience Choice winner voted by most views, and a final winner selected by a prestigious panel of three film experts.

As for the TIFF content offering, Hollywood Minute will also secure time on screens as required