It’s common belief that the debacle that was Tesco TV (latterly called Tesco Screens) (finally shut down back in early 2009) set the UK and continental European retail digital signage market back several years. 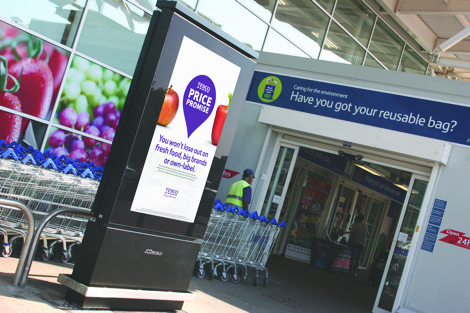 That whole saga has been much talked about online and during industry conferences and it is not my intention to get into that debate again here but I raise it because very soon, Tesco (and JCDecaux) is very likely once again to be centre stage. This time though it looks like all involved have thought long and hard about what’s needed and MAY have actually got it right.

Whilst we are all excited and waiting for JCDecaux to launch the Waterloo Motion, it is more likely that the really big digital initiative from JCDecaux is the 400 digital screens being erected outside UK Tesco stores.

It is claimed that the network of new digital screens will be made even more appealing for advertisers due to its ability to fuse data from the outdoor industry’s Route research, with Tesco’s Dunnhumby retail sales data.

If it’s true that “Advertisers will be able to target specific dayparts to optimise their ad campaigns by four parts of the week – morning, afternoon, evening and night time” then we’d suspect that BroadSign (JCDecaux’s software supplier of record) has either been really busy or has got their work cut out.

By far the best Route specific software linkup we have seen is Ayuda Media System’s Cerbero (note to BroadSign, if you are working on all this, just license Cerbero rather than trying to re-invent the wheel)

Media Week reported that Spencer Berwin called the development a “hugely important step” for its outdoor offering, enabling brands and marketers to target specific dayparts to optimise their ad campaigns.

It certainly sounds exciting and thank goodness that the industry hasn’t decided to attempt to go back inside the store to sell advertising.

This entry was posted on Thursday, August 8th, 2013 at 15:08 @672 and is filed under DailyDOOH Update. You can follow any responses to this entry through the RSS 2.0 feed. You can leave a response, or trackback from your own site.