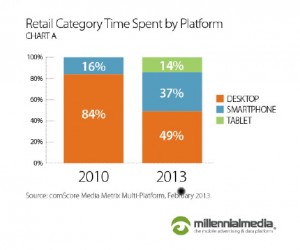 This is part of Millennial Media’s Mobile Intel series, and is one of the most in-depth reports it has ever put out.

The report contains info on everything from what campaign goals retail advertisers have, to the most popular in-store activities consumers are undertaking on their mobile phones.

Here are some of the highlights:

This entry was posted on Tuesday, August 13th, 2013 at 10:00 @458 and is filed under Scuttlebut. You can follow any responses to this entry through the RSS 2.0 feed. You can leave a response, or trackback from your own site.