Tom Touchet, president and CEO of City24/7, may have won many awards, but nothing made him happier than to recently receive the ADA Sapolin Telecommunications Award from New York Mayor Michael Bloomberg on behalf of the City24/7 team for “doing extraordinary work for New Yorkers and visitors to our city living with disabilities”. 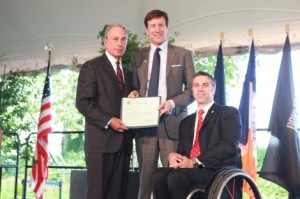 Accessibility for for those with disabilities, eg. people in wheelchairs, is just one of the many features of the company’s kiosk displays now being rolled out across New York (they’ll number more than 100 by the time of #dpbmedia Week in October) and soon to be seen in other cities in the U.S. and beyond.

Touchet is cagey about divulging where the next displays will be – probably in another U.S. city – but we won’t be surprised to eventually also see them in South America from where he recently returned from an extensive business trip. And while right now, the New York displays are in phone kiosk format on street corners, the next ones will be stand-alone displays.

City24/4 is a network of informational screens geared for both tourists and New Yorkers alike. In development for three-and-a-half years, it has been developed to offer just about everything that might be wanted: safety and security information; location of government offices; wayfinding; when the next bus, train or subway will arrive; local businesses; when and where the next green market will take place; tourism information; and, of course, ‘deals’ from retailers, restaurants and more.

Interested in seeing a Broadway show? Theatre companies can not only give you information of last-minute seat discounts, but you can order them on your mobile phone.

Retailers can push deals – and if they are a small local business, they can arrange just to have the information on a few screens in their neighbourhood, rather than on the whole network. 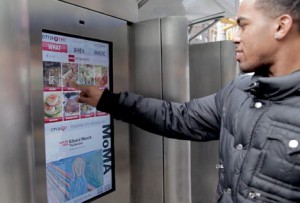 Changes are made almost instantaneously as requested, currently by Touchet’s staff of 10 (soon to be growing), but work is underway which will soon allow changes to be made by individual companies eg. retailers who might want to offer a special deal.

“We wanted to make sure that it was everything we wanted it to be before officially launching,” says Touchet. “We did a pilot project a couple of years ago to be sure of what we needed and how it would work.” (Those in the pilot project were largely indoors and are still in operation under a private, separate operation.)

Many partners have combined to help make City24/7 a reality. Among them are: LG Electronics for the displays; Livewire Digital to help with the software; Roadify for the transit scheduling; Verizon Wireless Group. Verizon FIOS Group, and Time Warner Cable for wireless and connections; Cisco; The Mayor’s Office for People with Disabilities; TheaterMania; CityMaps.com; Grow NYC; the Union Square Partnership; and, of course, the City of New York.

Union Square, lesser known by tourists than Times Square, has more of a neighbourhood feel, and Touchet says , “The area is home to New York University and one of the largest Green Markets. We know pretty well what tourists look for but was important to see how the locale residents would use the displays. That’s why we launched in that area.” 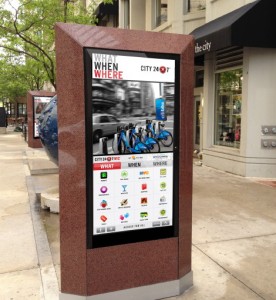 “Union Square is one of the most vibrant, active neighbourhoods in the cit, with countless dining, shopping, entertainment, cultural and nightlife options at any given moment,” says Jennifer Falk, executve director, Union Square Partnership.

“The City 24/7 technology provides neighbourhoods with a tremendous resource to reach the public, and gives visitors everything they need to know, about where they are, in a convenient, user-friendly format.”

City24/7 was launched officially right after Hurricane Sandy devastated much of the the Atlantic northeast coast including much of New York, so, while it wasn’t available for safety and security messages at the time of the storm, it was used heavily after launch to tell people how they could help and where they could give donations.

And while New York City was a perfect setting for the initial deployment due to its pedestrian lifestyle, this Smart City concept is considered applicable to cities and towns of all sizes.

“I think we’re going to see much more interactivity in the digital out-of-home sector, especially once more people see how it gains attention and how they can monetize it,” says Touchet. “I also firmly believe that when you look at our full solution – including everything from disability functionality to safety/security capabilities to opportunities for small business – it better explains why cities are now calling us. We have a solution that is inclusive, and helpful on multiple levels.

“And as for our team’s recent award, well, I’ve personally won multiple Emmy Awards as well as a George Foster Peabody Award for coverage of September 11, but that our recent award came from Mr Bloomberg – himself a media and tech entrepreneur – was an incredible honor.

City24/7 is owned privately by the founders Roger Rowe and Karl Turkel, many of the staff, and three indvidual, unidentified ‘angels’ – in total about 13 people.

This entry was posted on Monday, August 26th, 2013 at 10:00 @458 and is filed under Scuttlebut. You can follow any responses to this entry through the RSS 2.0 feed. You can leave a response, or trackback from your own site.