To celebrate the DVD, Blu-ray and Digital release of Star Trek Into Darkness, Paramount Home Media UK invited fans to take part in a second screen social premiere on Twitter.

Paramount promoted this tweet-a-long event to audiences at rail stations nationwide and via JCDecaux’s digital Transvision screens (shown below) from 30th August. 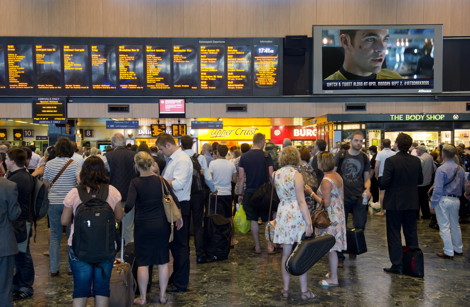 Stacey Knight, Director of JCDecaux Digital, told us “The rail audience is highly connected, with 56% more likely to own a smartphone, making this campaign for Star Trek’s tweet-a-long particularly relevant for the rail environment. This is a fantastic example of social media and outdoor advertising working together to create awareness of an exciting twitter-driven event.”

Paramount’s Marketing Manager Luisa Cotrozzi commented “We’re always looking for new and innovative ways to integrate our campaign initiatives through on-line & off-line channels. The amplification of our Social Premiere via JCDecaux’s Transvision media has given us the opportunity to reach both new and old Star Trek fans alike on their commute home, the perfect time to remind them to go #IntoDarkness with us on Twitter!”

Paramount invited audiences to join in a shared viewing experience as they press play on ‘Star Trek Into the Darkness’ at 8pm on 2nd September (the event included money-can’t-buy on-the-spot competition prizes as well as exclusive behind-the-scenes reveals).

The campaign with JCDecaux was planned and booked by MEC and Kinetic.

This entry was posted on Tuesday, September 3rd, 2013 at 09:08 @422 and is filed under DailyDOOH Update. You can follow any responses to this entry through the RSS 2.0 feed. You can leave a response, or trackback from your own site.