Cadbury, maker of the number one selling Easter chocolate, Cadbury Creme Egg, has put an ‘interactive’ billboard nine metres high into the air so Torontonians can witness a larger-than-life Easter treat battle against the Canadian winter blues. 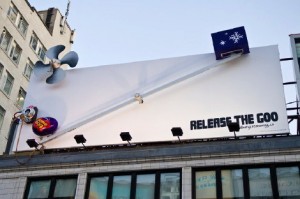 While it’s not digital, we can certainly attest that it draws attention. The new, first-of-its-kind, billboard at Yonge-Dundas Square in downtown Toronto has been constructed to respond to local weather conditions. The billboard features a long, teeter-totter like lever with a large box on one end and a giant, one and a half metre Cadbury Creme Egg on the other end. As rain, snow, sleet or hail begins to fall, the Cadbury Creme Egg will slowly rise to meet an oversized fan that will break open the egg, sharing the gooey, Cadbury Creme Egg filling, just in time for Easter.

This larger-than-life Cadbury Creme Egg set-up has introduced an entirely new kind of weather watch. With an average of 792.7 mm of precipitation dropping on Toronto each year, eyes are on the sky and the ‘de-gooing’ of the Cadbury Creme Egg is standing by. Now it’s up to Mother Nature.

Cadbury Creme Egg lovers across Canada that can’t make it to Yonge-Dundas Square to witness the countdown to Easter can view an up-to-the minute report on the Cadbury Creme Egg’s status via a live web feed at www.cadburycremeegg.ca.

Cadbury introduced its first Creme Egg in 1923 and, each year, more than 300 million Cadbury Creme Eggs are purchased around the world during the Easter season.