JCDecaux, the UK’s leading Outdoor advertising company and number one in digital Outdoor, announced this week the launch of a major initiative to double the size of its roadside digital portfolio. 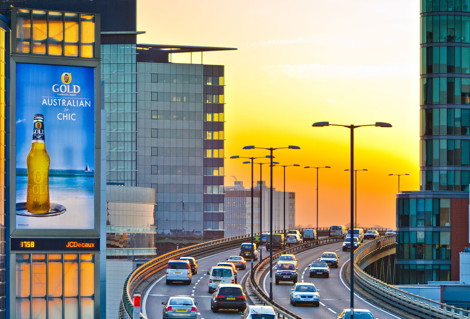 The first of the new digital screens will go live at the end of October with 30 screens planned to be live by the time of JCDecaux’s 30-year anniversary in the UK in 2014.

In London this autumn, JCDecaux will unveil key new premium sites: The Holland Park Tower, the M4 London Gateway and the A40 Spire and will digitise both faces of the iconic M4 Tower.

In one of the most significant changes to UK Outdoor, JCDecaux plans to digitise the iconic Old Street Roundabout in 2014, bringing digital to the heart of the rebranded ‘Silicon Roundabout’ area comprising Old Street and Shoreditch.

Spencer Berwin, MD Sales of JCDecaux told us “This major new digital investment is bringing unprecedented flexibility and scale to the UK market. While other people talk about change, JCDecaux is actually making the changes, driving the digital agenda in the UK. By 2014, JCDecaux will offer clients a portfolio of 30 digital roadside locations across the UK in addition to an expanded rail and mall portfolio that will include: 15 M-Vision screens in malls, 24 Transvision screens in stations, 800 D6s and over 2000 airport digital locations, including the exciting new portfolio at Heathrow Terminal 2.”

JCDecaux is also taking digital Outdoor outside London in 2014 with the digitised Trafford Arch in Manchester and two new locations in the North of England planned.

This entry was posted on Wednesday, October 2nd, 2013 at 18:21 @806 and is filed under DailyDOOH Update. You can follow any responses to this entry through the RSS 2.0 feed. You can leave a response, or trackback from your own site.