We had a chance to talk last week with Piers Mummery, CEO of BrightMove Media [1], London (U.K.), that made a soft launch of its TaxiCast taxi top advertising units [2] on 25 London Black Cabs this past summer. 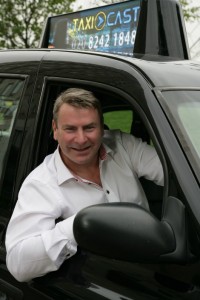 [3]The young company was officially launched by Mummery and two colleagues as majority owners (along with some private investors) in Dec./12, but was actually three years in development.

“We took the time to build our own software platform – ConnectACast – because there was nothing out there that could offer what we wanted,” says Mummery, who has spent 20 years as an entrepreneur in technology and telecom companies, then ran a garden supply chain, building and marketing the brand Shoots, before selling it in 2011.

TaxiCast has just completed its three-month soft launch, and all systems are ‘go’ for a rollout from the Transport for London regulators and successful feedback, says Mummery, from the public, the advertisers and the taxi drivers themselves.

TaxiCast uses low resolution LEDs on the two-sided rooftop units, with five second advertising slots on two separate 40-second rolling loops. One loop is standard; the other has three activation triggers, allowing for ads according to geographic location, day parting and thermo targeting. Advertisers have their choice as to whether they want be on the standard loop, or when and where their advertising will appear. An example of the latter, is that Magnum Ice Cream ran a successful campaign running its advertising when the temperature was above 16 degrees and skies were bright.

“There’s no other software that was able to handle this on a moving vehicle,” says Mummery. “Mobility was the key, and, further, we didn’t want to be reliant on a third party. What we have developed is absolutely fantastic.

“And we used the LED lights because we have a a moving vehicle with a short dwell time and it has to be seen from far away. This is a great product. This isn’t advertising like on a traffic shelter where the advertising is one-to-one. The moving vehicle dwell time is a key metric, as is the opportunity to see, and the impact with the multiple reach. Our platform measures the ad play, and with the GPS, we are able to build up a profile of residents, commuters, shoppers and tourists into a data group showing reach.”

The next step, says Mummery, is to build scale. The aim is to get into several hundred London cabs before looking into the thousands.

“We’ll build according to demand, and affordability,” he says. “And at this time, we are selling our own advertising but we know, as we grow that we will probably have to develop partners.”

We asked Mummery if the same London cabs could have both TaxiCast advertising and in-cab screens such as those of VeriFone Media [4].

“No,” he says. “The regulators are concerned with the exploitation and over-commercialization of advertising on and in the cabs. There’s also a limit on taxiwraps. However, there are 20,000 London black cabs, and we wouldn’t expect to see TaxiCast on them all. Rather, we will look to other U.K. cities and international expansion. London will be our flagship, but this offers global opportunities. We can foresee our product in any city that has a lot of taxis. But it’s one step at a time.”

To grow as he envisions, Mummery realizes that the company will probably have to gain partners, as well as investors.

“It’s strategic for growth,” he says. “We’ll grow as the market dictates, but we are wanting eventual international expansion. So, of course, we’re always looking at possible investors.”