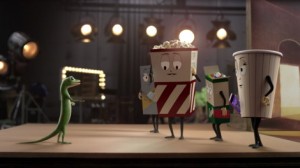 In partnership with NCM and Screenvision, national U.S. companies in cinema advertising, GEICO will air a series of sponsored Silence Your Cell Phone public service announcements in theatres this month.

The newly created cinema PSA’s, developed by The Martin Agency, Richmond, Virginia, include two creative executions that encourage customers to Silence Your Cell Phone. The first execution stars the GEICO Gecko, and plays on the nostalgic ‘let’s go to the lobby’ announcement for moviegoers to purchase food and drink at the concession stand. In a twist on this old school message, the GEICO Gecko asks those who are not ready to silence their cell phones to ‘go to the lobby’ to continue their conversation.

The second execution features Caleb – the popular talking camel from the famous ‘Hump Day’ television spot – boisterously entering a cinema to remind movie-goers to put away their phones during the film, and to refrain from texting.

“GEICO is a ground-breaking creative advertiser,” says Bill Koenigsberg, president, CEO and founder of Horizon Media. “And as the first brand to explore humor within the usually staid insurance category, GEICO is always looking for relevant opportunities and environments to entertain its consumers.”

“The unceasing reminders to silence your cell phones at the movies can be mundane,” says Sean Riley, creative director at The Martin Agency. “We’re excited to infuse some humor in the courtesy message and to entertain audiences before their movie begins. We hope that audiences get a kick out of seeing GEICO’s quirky characters on the silver screen.” 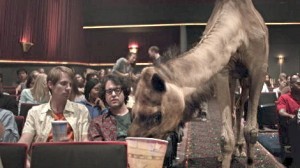 “This is one of the most unique deals that NCM has ever made because of the strength of the concept, the brilliant creative execution and the relevance in our space,” says Cliff Marks, president sales and marketing, NCM Media Networks. “It’s the result of a very strong collaboration between NCM and the Horizon Media team which conceived and nurtured the concept to reality. Our theatre owners love the deal. I know that consumers are going to love it as well and most importantly, respond to it.”

“Our strategy and strong relationships with Horizon Media and GEICO have enabled a significant and creative presence on our screens throughout the year,” says Jim Tricarico, executive vice-president, chief revenue officer at Screenvision. “Given the immersive and captivating experience of the cinema, it is an optimal environment for GEICO to showcase this campaign. It is a clever way to share a message on behalf of theatre owners, and one that we feel moviegoers will really enjoy.”

GEICO is a major player in the auto insurance industry, and is reportedly projected to take over the number two position in the category by the end of the year. The brand has become synonymous with creating tremendously successful advertising over the years with famous characters such as the Caveman, Maxwell the Pig, the GEICO Gecko, and most recently, Caleb the hump day camel.

This entry was posted on Monday, October 7th, 2013 at 10:00 @458 and is filed under Scuttlebut. You can follow any responses to this entry through the RSS 2.0 feed. You can leave a response, or trackback from your own site.