In an extremely interesting talk yesterday morning at the DailyDOOH Investor Conference, Eric Sondag, partner at Searchlight Capital [1], gave a detailed account on what is important from the investor’s view before putting their money into a digital signage company. – including the risks involved as well as the opportunities for both investors and the recipients. 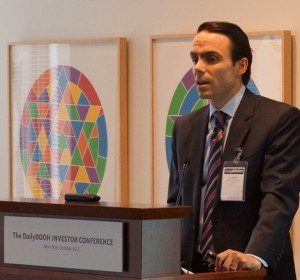 [2]Like the previous speaker as well as several of those following, Sondag put the need for scale at the top of the list for companies looking for investors.

Sondag said that digital out-of-home revenues will grow 10% CAGR year each year to reach $3.5 billion by 2017. The outlook for the industry is driven by several facts including stability; penetration of screens in retail and other common spaces; expanding reliable national footprints; significant reach; ability to target consumers at or near the point of purchase; continued evolution of integrated media planning and more.

“Agencies are increasingly taking a share for DOOH from traditional budgets,” he said. “THey are continuing to integrate it into marketing campaigns. It’s complementary to other media. The product means decreased eCPM. It reaches 46% of all adult population.”

Sondag says that there are 200 operators and more than 500 networks across the U.S.. But few networks offer international scale, and less than 15% generate more than $10 million in annual revenue.

“Early investors were not always rewarded, and the time and costs to clear up the networks were significant,” he said.

Sondag enumerated several risks for investors. The industry only increased 1.6% year on year in 2009 after having had double digit growth for a decade. It remains vulnerable to overall macro-economic environments.

What a company like Searchlight Capital looks for, said Sondag, are:

The is but one of several articles that we’ll be writing on over the next few days about some of the speakers at this year’s DailyDOOH Investor Conference winding up today in New York.