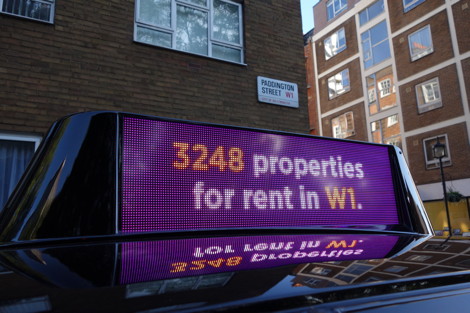 The campaign is expected to deliver over 3million ad plays over a nine-week period in the run up to Christmas and claims to use postcode location to broadcast availability in an area.

BrightMove Media will be delivering real-time information from Zoopla about properties for sale and to rent in all 127 London postcode locations – the idea being to change the screen display according to postcode location as the TaxiCast cabs move around London.

Charlotte Harper, Marketing Director of Zoopla said “We’re pleased to be trialling this new form of geo targeting technology with BrightMove Media’s TaxiCast. It’s an innovative approach in the digital advertising market space and allows us to show the range in property availability across London.”

Over the course of the last 4 months already over 18 million adverts have been broadcasted across the different campaigns. This is a total of over 25,700 hours of screen time spent advertising on London’s black cabs.

Benefits of TaxiCast include commission incentives to taxi drivers and an opportunity for advertisers to bring geographically and time targeted advertising to the streets of London.

This entry was posted on Tuesday, November 5th, 2013 at 11:11 @508 and is filed under DailyDOOH Update. You can follow any responses to this entry through the RSS 2.0 feed. You can leave a response, or trackback from your own site.