This week, Londoners and tourists are being targeted by no less than the behemoth Google with a pilot campaign at 100 specific bus shelters and 60 tube (ie. subway) stations that involves real time search. 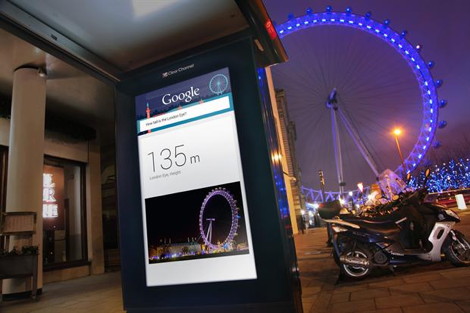 The ‘Google Outside’ campaign uses Google Now technology – which is used in smart phones – to provide people with information about their location.

Choosing the locations was a strategic part of the campaign.

“The strategy was to pick the right, most interesting locations based on the shops and the people in each area,” says Jamie Finn, client director at Talon Outdoor. “It was a case of, for example, being able to mention coffee shops nearby in the morning while in the evening it would be different since people would be going out to bars, restaurants, karaoke bars.”

Talon Outdoor developed the campaign along with creative agency R/GA (the back end of the campaign takes content from Google Live Search results).

“It was a real challenge, because systems are not usually set up for something like that,” says Finn. “Further, there were restrictions on the amount of content that could run.”

In total, there are 3,200 creative executions, each related to dayparts, weather and other contextual information.

R/GA London worked with Google on the concept behind the pilot and its execution, while the media buy was by Manning Gottlieb OMD. The bus shelter media is sold by Clear Channel UK, while CBS Outdoor manages sales for the London Underground.

“We have 100% ownership of the 60 cross-track screens in the underground, and 50% ownership on the roadside spaces,” says Finn.

Talon Outdoor is doing research on the campaign via a smart phone app questionnaire. The emails overlay GPS data, so the questions are sure to go only to people who have seen the advert.

This entry was posted on Thursday, November 7th, 2013 at 07:00 @333 and is filed under DailyDOOH Update. You can follow any responses to this entry through the RSS 2.0 feed. You can leave a response, or trackback from your own site.