When we heard that MVP Interactive had teamed up with Santander Bank to deploy a MorphingStation at Lincoln Financial Field for the remainder of the 2013 Philadelphia Eagles Season, it rang a bell and, sure enough, it’s the third installation of its type by the 16-months-old MVP Interactive. 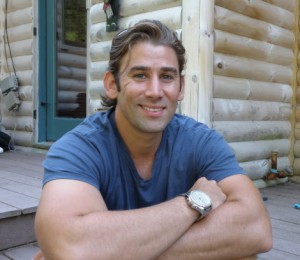 “Each of our installations is custom designed for the brands,” says James Giglio, CEO of MVP Interactive, a Philadelphia-based sports marketing software company specializing in in-venue fan engagement.

“Earlier ones included one for the Houston Dynamo soccer team with the BBVA Compass Bank, and for the Houston Rocket NBA games at the Toyota Center. The difference in the Philadelphia Eagles one is that it’s mobile, on wheels, so it can be moved around easily.”

Giglio says that while MVP Interactive’s software is used in all, the installations themselves are owned by the teams.

“We tied them together with the sponsors – in the new one it’s the Santander Bank – because the teams have had limited marketing budgets to work with and this is a good branding opportunity for the bank,” says Giglio. “The one at the Toyota Center is being used all year ‘round, not only for the Houston Rockets’ games but for concerts, trade shows and other events. And we have an arrangement with the various MorphingStations that they can renew the software license annually.” 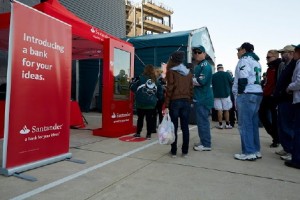 The patented technology allow fans at the Philadelphia Eagles games to morph themselves into the #sandandergameface – a combination of virtual face paint, Eagles helmets and crazy hair-dos. Customized facial detection software captures the fan’s image and the fan can then touch the screen to make their choices, have and uploaded directly to Facebook or Twitter, while the brand captures key fan data such as email addresses and demographic information.

Other popular deployments of the MorphingStation allow sports fans morph into virtual Bobbleheads or their favorite team’s mascot. The Morphing station is a Wi-Fi hot spot for easy connections to Facebook and Twitter, and emailing to themselves

Both the team and the bank will have a wealth of data both from the email addresses and because MVP Interactive is using its own anonymous analytics to compile data on the use of the various aspects of the MorphingStation. (The company often uses Quividi, although not for this particular installation.) 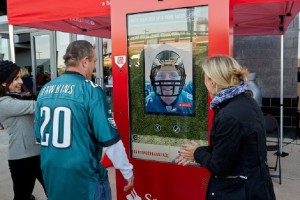 “We hope to make MorphingStations available in sports arenas and rinks across the U.S. and beyond,” says Giglio.

“We’re very interested in expansion to the U.K. and Europe, and to Canada. But we aren’t just looking at sports facilities. We are also interested in retail malls and the theatrical sector such as movie theatres.”

Giglio is owner of the company, with a small backing from Mall of America.

This entry was posted on Tuesday, November 12th, 2013 at 10:00 @458 and is filed under DailyDOOH Update. You can follow any responses to this entry through the RSS 2.0 feed. You can leave a response, or trackback from your own site.