JCDecaux #NianticProject At US Airports

JCDecaux SA has launched a US Airports gaming partnership with Niantic Labs@Google for world travelers at both John F. Kennedy and Los Angeles International Airports. 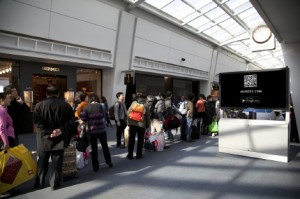 The vision behind Ingress was to create a ‘move-to-play’ feel and encourage players to get off the couch and see the world around them while enjoying a truly social game.

The game is intended to be played globally and revolves around the idea that there is a strange and powerful energy force gamers must battle and conquer.

More than 70 Ingress Airport virtual portals using JCDecaux digital displays have been integrated in the game at JFK and LAX main gate room areas. With 113 million passengers, both airports will provide a new dimension to existing and potential new gamers.

“As we see an increase in media convergence between out-of-home media and mobile technology, it seems like a natural evolution to partner with Niantic Labs at Google on this ground-breaking approach to social gaming based on location,” says Jean-François Decaux, chairman of the Executive Board and co-CEO of JCDecaux.

John Hanke, General Manager of Niantic Labs at Google, says, “Ingress marries mobile gaming and the real world, and we are excited to integrate JCDecaux’s digital display network into the Ingress game which already includes public artwork and historical sites. Our goal is to enrich everyday experiences with an element of mystery and fun by encouraging our users to look for the unexpected, and JCDecaux’s digital displays are now part of that experience. ”

Niantic Labs is a division of Google dedicated to creating mobile computing apps that interact with the real world for entertainment, education, information and more. Founded in 2011 by the team that created Google Earth, Niantic Labs explores the possibilities of getting people out in the real world through the creation of outdoor adventures and interactions with local environments in brand new ways, using technology. In Nov./ 12, Niantic Labs launched Ingress, the geo-location-based game which involves players exploring and interacting with the real world. The mobile gaming app is currently in closed beta and available for Android devices.

This entry was posted on Wednesday, November 13th, 2013 at 15:00 @667 and is filed under DailyDOOH Update. You can follow any responses to this entry through the RSS 2.0 feed. You can leave a response, or trackback from your own site.