Amscreen has just announced that it is backing the Philippines aid effort by airing charity appeals to millions of people up and down the United Kingdom. 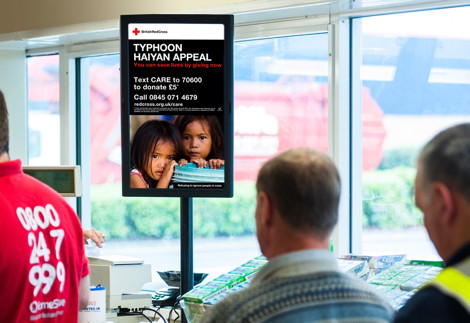 The company contacted Save the Children and the British Red Cross earlier this week to donate advertising space to broadcast the appeals.

Amscreen will play the campaigns on their 4,500 screens across the country reaching 35 million people a week, in a bid to help raise money for the victims of Typhoon Haiyan, which devastated the Southeast Asian country earlier this week.

Amscreen is delighted to be able to support such a worthy cause. CEO Simon Sugar said, “We are happy to do what we can to help Save the Children and the British Red Cross raise much-needed funds for the Philippines disaster. The typhoon has had a devastating effect and screening these messages will encourage the British public to dig deep and add to the GBP 13 million that has already been raised.”

The ads have been created to help mobilise the British public to donate funds to the two charities’ relief campaigns and both will run until 21st November. The ‘Save the Children’ campaign will directly support infants and children affected by the disaster. Both charities are being led by the Disasters Emergency Committee (DEC) to help fund Filipinos struggling to survive with no food, water or shelter as a result of the Typhoon.

This entry was posted on Wednesday, November 13th, 2013 at 14:02 @626 and is filed under DailyDOOH Update. You can follow any responses to this entry through the RSS 2.0 feed. You can leave a response, or trackback from your own site.