Just over half way there now, and the stubbly beard has been trimmed into the shape of a moustache. That’s much more of an achievement than it sounds, – it not so easy to see where the lines should be when the hairs are ‘salt & pepper’ coloured – err, that would be more salt than pepper – Ed. 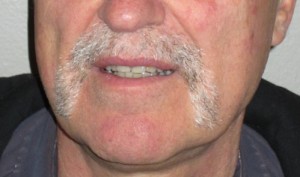 The idea was to replicate that droopy Zapata ‘tache from my teenage years which at the time was supposed to appeal to the ladies, but the result is that I’m now getting the eye from 60 year-old bikers…

I’ll be quite relieved at the end of the month….!

So if anyone would like to make it all worthwhile and help to finance my moustache, they can do so here:-

As usual, all contributions gratefully received…!

This entry was posted on Friday, November 22nd, 2013 at 19:29 @853 and is filed under Scuttlebut. You can follow any responses to this entry through the RSS 2.0 feed. You can leave a response, or trackback from your own site.